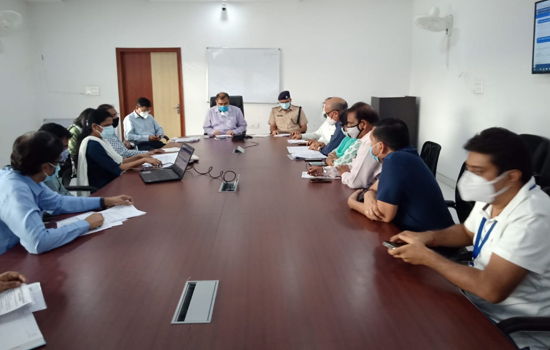 Udaipur. The Udaipur Chamber made discussions of Commerce and Industry regarding adopting a practical policy in relation to the continuation of industrial production in the lockdown period before the district administration.

In the meeting held in the District CollectorateMeeting hall, the President of UCCI, Mr. Komal Kothari, in the context of the order issued by the government on May 9 regarding the industries, put practical problems related to the industry were discussed.

Chairman Shri Komal Kothari has problems before DM regarding authorized only one person to issue an e-Intimation ID card for all personnel in industries with a high number of workers, time restriction in movement of personnel coming from far away, bank or other work personnel.  He, however, Makes recommendations regarding allowing the industry owner or curves manager to be allowed to move from transit to transit from one factory to other factories.

District Collector Mr. Chetan Deovra informed that by logging on to the online web portal of the state government covidinfo.rajasthan.gov.in and going to Intimation by Industries, an e-ID would have to be generated to register the signature of the person authorized by the industry. This is the first phase of this process which all industries have to follow. Under the second phase of the process, from May 12, IDs of personnel and IDs of vehicles used for traffic in the third phase will have to be generated. If there is any practical difficulty in this, then the administration will try to overcome it by discussing it.

The District Collector said that the government's intention behind issuing the said order is to prevent corona infection as well as to prevent the migration of workers by continuing industrial operations.

In the context of the memorandum submitted by the UCCI, the District Collector has made arrangements to authorize more than one person on the government's web portal to issue transit passes to all the personnel of the industry for commuting on a fixed route to the workers coming from far away.

District Superintendent of Police Shri Rajiv Pachar, in the context of the order issued by the government, said that the industries would have to make arrangements for the living and eating of the workers so that the traffic can be restricted. He called upon the police administration to curb the unnecessary movement of people to continue industrial activities and prevent corona infection. Mr. Pachar suggested the personnel hang the ID card in the pocket instead of turning it around the neck so that the policemen stationed at the block could see it.

Information related to issuing transit passes was given on the web portal of the state government by the IT department of the District Collectorate.

The meeting also discussed the establishment of a free quarantine center for Corona-infected patients.