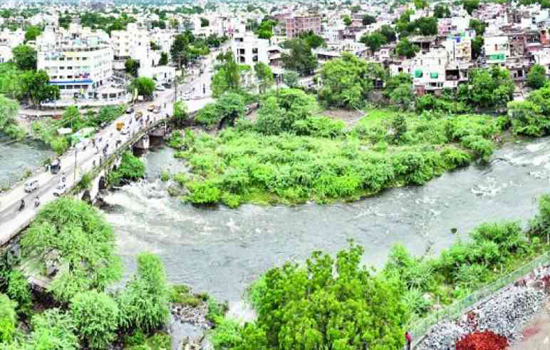 Udaipur: (Dr. Munesh Arora) Politicians and administration shocked by a statement of MayorThe high level of investigation should be done against those who destroy the river AharA statement was given by the new mayor of Udaipur on the riverAhar ruined all the wrist of the deceit being made with thepeopleofUdaipurpolitically for years.Inthis country,administration and politicians speak whats ever relevant or not on the demand on seeing the public. The public nature of Udaipur is said to be straightforward as compared to other parts of Rajasthan, so the administration and politicians like it do what they want, they neither care about the public nor have any grief to annihilate their hard-earned income. If the government and the court get an inquiry, many administrative leaders will have to be punished. Even Udaipur's administration does not even care about the decisions given by the High Court. Despite the order of the high court of Rajasthan in the judgment ofAbdul Rahman's case ordered on the establishment of the river Nalan and the ponds, the Ahar River is losing its essence today due to the mislead treatment of the river Ahar. The administration cannot return the form of the rivers of Ahar as that of year1949, nordoes itdaretocomplywiththedecisionofthecourt,because the occupation in the river Ahar has been under the supervision of the administration.Ahar civilization could have been inside the river. Rather, the administration is providing facilities to the people who have high access there. Today, the way the sewerage line has put in the name of the administration in the eyes of the administration, the line was put outside the land, which the public and administration of Udaipur is watching every morning and evening and because it is helpless in front of the high-infinitival peoples. Today, the capacity of the river Ahar has been reduced considerably in the name of the sewerage line. Unlike the sewerage line that was supposed to be put inside the river's ground, which did not affect the rivers fill capacity and flow, the sewerage line was thrown out and the soil extracted from its excavation was also put there, which led to the erosion. The filling capacity of the river has reduced considerably. Along with this, the sewerage line has been inserted much inside the current shore, till the edges of the shore have been separated. On the other hand, citing the decisionoftheHighCourt,theadministrationis intentonuprooting the residents of the RoopSagar area of Udaipur in the name of submerged Kshetra who have been forcefully displaying the name of FTL. Today, they are constantly doing hunger strikes but someone listening to them Is notWhereas theArazies coming under the Roop Sagar Talab were told by the administration itself in the High Courtin 2007 and said that these Roop Sagar Talab will be of private accountability,followed by the conversion of the lands of the people living around Roop SagarTalab as per the Municipal Development Practice Rules. For which permission wastaken from the UDH Department of Jaipur, but today they are being designed todestroy in the name of FTL Is. They are being shown fear of demarcation in thename of FTL. Residents of Roop Sagar area are being denied facilities, theadministration is forcing them to live in hell by not making 60 feet and 60feet of roads identified by the master plan. Iftheroadsof60feetand60feethadbeenbuilt,thenencroachment on Roop Sagar would have been stopped automatically. But what was the FTL of flood in Ahar river, the administration of Udaipur has forgotten that it does not care about it? Today,RoopSagarlakehasbecomemoreimportantforadministration than the river Ahar. Politicians and administrationwho showthe dream of making Ahar to Venice will be a big thing even today if the existence of the river Ahar is saved. Recently, the much-talkedabout and cherished secretary of the city development practice, RamNiwas Mehta, spent billions of rupees for the citizens behind the Congressleader Dr. Girija Vyas and in the drain near the UIT, to construct a water-filled drain in the middle of it. Anyone who has been born today can see how far it can be said to waste money in this way. Dewas 3and 4 were being demanded the availability of drinking water in Udaipur, which was also set on fire by the mayor of Udaipur, when she became the minister of Water Resources, in preparation to take the water of Dewas 3 and 4to the royalty. The leader who started politics from Udaipur did not care at all about the suffering of the people of Udaipur, if shewanted, shewouldarrangewaterforthepeopleofUdaipur in her hands. There was an opportunity, but she could not do anythingwhilebeingtheMinisterofWaterResources.Engineer of citydevelopmentAnitMathur,whiletalkingaboutRoopSagar Talab, had told that the only solution of Roop Sagar Talab is to make it back from the foundation; otherwise, it is Ardvan Dam which has no foundation. There can be a danger for the stream, in this, stopping thewater above the mouth will always spray water for the downstream, because the level of the land on either side of the tank is one. In fact, is no natural Talabnor does it always have a source of water to flow so animals were temporarilystopped by entering just the soil to feed water. Engineer Mathur clearly believed that theBakniriver which used to flow earlier is over it, so this problem can be solved by making a systemic Mukhi in Roop Sagar and a stream of sewer from Roop Sagar to Ahar river. Roads should be made all around so thatthe morning can be washed in the evening. In the master plan, 60 feet and 60feet of the master plan road can be made on this side. Due to which thedemarcation of RoopSagarwillbedoneby itself,buttheadministrationshouldwork on good advice.