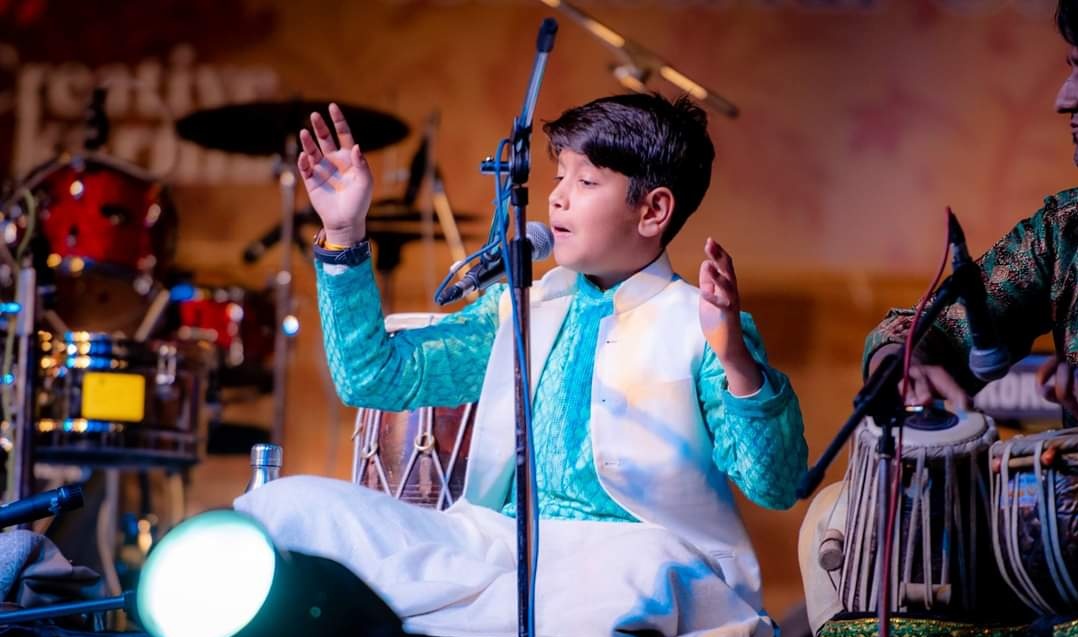 : It was an evening that mesmerised listeners across parts of the world with a unique blend of Carnatic and Hindustani Music. Smritiyaan e-concert’s #UdaipurChapter had the audience enthralled by little maestro Kaustubh Manipushp Kunj. Winner of ‘Pratibha’ online talent hunt, the 15-year old prodigy from Ajmer mesmerised the audience with his soul-stirring performance.

The ‘Pratibha’ talent hunt was initiated as a platform to give an opportunity to local artists from Rajasthan a chance to perform globally. Entries were invited from Udaipur, Rajsamand, Chittorgarh, Bhilwara and Ajmer districts of Rajasthan to come and audition in front of an esteemed jury of personalities – Bhajan Samraat Anup Jalota, Kathak Guru Shovana Narayan, Tabla Maestro Pt. Charanjit Lal, and Flautist Pt. Ronu Majumdar. Among over 100 entries, six participants were shortlisted for the final round. Kaustubh Manipushp Kunj and Navdeep Singh Jhala from Ajmer; Neeraj Mistry, Vinay Kadel and Mohd. Tabriz & Ariz from Udaipur; and The Rajsamand Group comprising of Harshit Purbiya, Nimisha Pagaria, Raksha Pagaria & Komal Nagarchi from Rajsamand showcased their talent in the final round, where Kaustubh was declared the winner. Kaustubh is a Hindustani Classical Vocal and Instrumental Tabla artist who started his musical journey at the age of four. He has previously won a number of awards at district, state, national and international levels.

The evening also had performances by music maestros of India - Dr Mysore Manjunath, Pt. Gaurav Mazumdar, Vidwan B. C. Manjunath and Pranshu Chatur Lal presenting the much-awaited jugalbandi of Carnatic and Hindustani Ragas. The moments of soulful elegant fusion of North and South music were made complete with the Violin, the Sitar, the Mridangam and the Tabla.

Sharing the stage with such acclaimed Indian maestros Kaustabh said, “I congratulate Hindustan Zinc and Pandit Chaturlal Memorial Society for successfully organizing such a great event, especially during the pandemic situation. I am so grateful & honoured to have performed in front of such world-renowned artists during the auditions and the event as well. I thank them for their appreciation, blessings & guidance. It was like a dream come true for me”.

Hindustan Zinc has always been at the forefront of promoting local talent and supporting cultural endeavors as a part of their CSR initiatives. As a step further in this direction, the company partnered with ‘Smritiyaan’ to launch ‘Pratibha’ talent hunt in January 2021 to give an opportunity to Rajasthan’s local artists to perform globally.

“Indian classical folk music and dance have always been an important part of our culture and heritage. We at Hindustan Zinc have always encouraged and supported budding talent by providing them with different platforms to showcase their art, learn, and grow. Pratibha Talent Hunt is one such unique initiative we partnered on to unearth the hidden talents from the local villages and communities around us and it’s great to see amazing talents like Kaustubh perform. I wish this little maestro all the best for the future”, said Mr. Arun Misra, CEO of Hindustan Zinc.

Hindustan Zinc, a Vedanta Group Company, is one of the world’s largest and India’s only integrated producer of Zinc-Lead and Silver. The Company has its Headquarter at Udaipur in the State of Rajasthan where it has its Zinc-Lead mines and smelting complexes. Hindustan Zinc is self-sufficient in power with captive thermal power plants and also has ventured into green energy by setting up wind power plants. The Company is ranked 1st in Asia-Pacific and globally 7th in Dow Jones Sustainability Index in 2020 amongst Mining & Metal companies. Hindustan Zinc is a certified Water Positive Company, a member of the FTSE4Good Index and has scored ‘A’ rating by CDP for climate change.

As a socially responsible corporate, Hindustan Zinc has been relentlessly working to improve the lives of rural and tribal people residing near its business locations. The company is amongst the Top 15 CSR Spenders in India and are currently reaching out to 500,000 people in 184 core villages of Rajasthan and 5 in Uttarakhand. As a market leader, Hindustan Zinc governs about 77% of growing Zinc market in India.