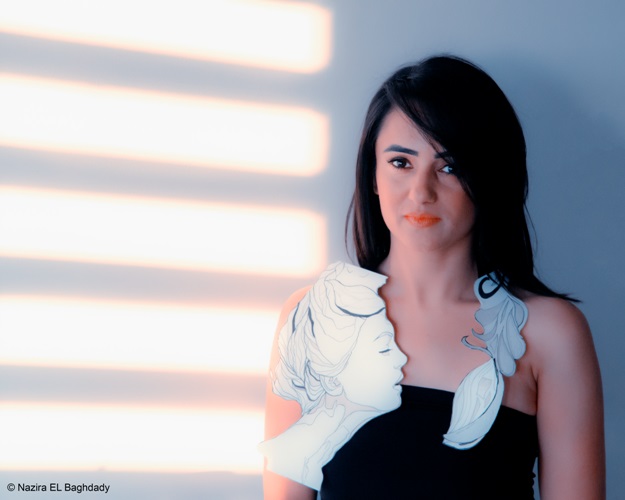 Born and brought up in Udaipur, India, ArwaTurra is professionally an interior designer, self-taught artist, an ardent fashion lover and a poet. She finished her school and university education from Udaipur and her diploma in Interior Designing from PremlilaVithaldas Polytechnic in Mumbai, India. She is currently based in Egypt after tasting the slice of life in Dubai and Jamaica.

After her second child, her postpartum depression phase lead her into a serious retrospection, where she realized that she had to be a lot more than what she was. Her inclination towards art was a driving force that directed her into pursuing her passion through stories. She started off by learning the basics of art through the internet, with whatever time she had in her hands.

Arwa weaves beautiful stories of strong and independent women on her canvases. Her mixed media art form is one of a kind where her feminist side is reflected in her work. She wants to profoundly communicate every emotion and personality of women on her canvas and clothes complimented by the backdrops of beautiful architecture from around the world. However, the eyes get glued on the beautiful design of the dresses of her illustrations which are finished with fabric and paper flowers, ornaments and embellishments making her art pieces 3 dimensional. Arwa says she lives her dream of being a fashion designer through the dresses she designs intricately on her canvas. It is just not visually appealing but has a deep message penned down by Arwa herself that stimulates deep emotions and introspection in the viewers. There is an intended concept behind every artistic decision she makes. Arwa also loves drawing surreal sketches and writes poetries that transport the readers to her own ‘Mindfields’ of love, desires and surrealism

Udaipur based MSquare production is soon going to launch a coffee table book of Arwa’s poetry and art, named ‘Heartstrings’. This book will have fine art sketches made by Arwa alongside the poetry she has written on Love and women.Arwa’s poetry and fine art gravitate around the field of human mind and interpersonal relationship.Arwa’s poetry expresses the bold and subtle emotions of women engulfed in Love. When asked why she decided to publish a book she told us that her clients who used to buy her artworks along-with the poems, often used to suggest that her artwork and poetry should be compiled together. So after she was encouraged by MrMukeshMadhwani, CEO of MSquare Productions to publish a coffee table book on her work, she agreed that a book will be a good medium to share her art and thoughts to a wider set of audience. Not everyone can buy expensive artworks but by the means of this book anyone can have the print of her artworks and the poems for reasonable price. By means of the poetry Arwa is willed to show the society that it is very natural for a woman to experience and express all the forms of love. It is her rights and should not be considered as taboo. The inauguration for the book was done in Egypt by the India’s Ambassador to Egypt, Hon. Mr Rahul Kulshetra. MrKulshetra extended his best wishes to MrsTurra for her upcoming book and congratulated her for her commendable contribution in the field of arts and writing


Arwa was shortlisted by the New York art gallery to exhibit her work. In recent past she had exhibited her work at galleries in Egypt and Jamaica. Arwa had appeared twice on Live shows on Jamaican television to showcase and discuss about her unique art concept.  Arwa was featured on cover pages of leading Jamaican and Indian newspapers and her work has been appreciated repeatedly by digital media in Caribbean and India. She has been felicitated by various institutions for her contribution to the field of arts and making a niche for herself in foreign lands.  So far she has received a national award called IIID for designing a residence. She has also been felicitated with honours like ‘Shakti’ award, INIFD award, ‘I am She’ award for being an influential woman in the field of arts and writing. Arwa’s poetry was also included in an anthology published by HBB, a famous Delhi based publishing house.

Arwa is on her journey to learn and master in different art-forms; human emotions being her forte. Her expat life, extensive travel and the interior designing qualification add to her love and knowledge of different cultures and world history that reflect in her arts. She aims to cover many stories on her canvas, drawing one country and one woman at a time. Her love for reading, writing and emotions is transforming her into a woman who is no more confined and limited to the four walls of her definable self. She believes art and writing is her lifelong voyage of self-discovery and they fill her need as elemental as breathing.

Arwa believes that Love is the strongest energy that binds this universe and she lives by Rumi’s quote, “Love is the water of Life. Drink it down with heart and Soul.”