First edition of the Zinc Cup held among much fanfare at Zawar, Udaipur 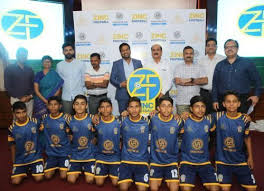 Zinc Football Academy team created history by claiming the inaugural edition of the Zinc Cup by defeating Hindustan Zinc Corporate team this Thursday. Held at Zawar in Udaipur, a place which is rich in its footballing history and legacy, the matches started amidst a sizeable and boisterous crowd cheering on the young footballers of the Academy and also the enthusiastic corporate team who played their hearts out to lay their hands on the winning trophy.

Grouped in two pools of two Hindustan Zinc teams and one Academy team in each, the Academy kids came out as table toppers in both. The Corporate teams showed good composure initially but were eventually conquered by the young kids, who are also preparing for the upcoming CBSEWSO State Subroto Mukherjee Cup scheduled for next week.

13-year-old midfielder JhangminthangHaokip was the top scorer of the competition bagging four goals, including one hattrick, while Aman Khan and SubhashDamor scored twice apiece.

to this first edition of the Zinc Cup. The young boys are undoubtedly levels up compared to the corporate team but I am sure the next edition will have a different story."

The Zinc Cup, a bilateral tournament played between the Academy kids and the corporate team, saw its first edition held successfully on a bright evening. The corporate team represented by the employees of Hindustan Zinc –a Vedanta Group company, showed great sportsmanship by accepting the challenge from the kids.