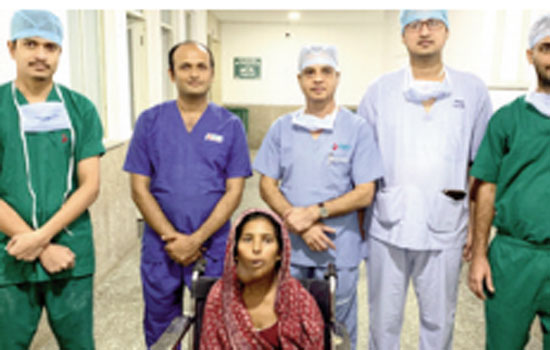 Udaipur: The freely successful operation of jaw disease was conducted inPacificMedicalCollegeand Hospital. an operation that lasted for 5 hours, carried out by the team of maxillofacial surgeons Dr. BD Roy, Dr. Nilesh Bhanawat, Dr. Himanshu Gupta, Dr. Prakash Audichya, Dr. Arun Mathur, Brijesh Bhardwaj, Deepak and Suryakant.For the last two years, the 16-year-old Gotti Rana, a resident of Kotwadi Rana village of Banswara, started swelling in the last two years, which continued to grow and he had swollen like a big coconut. ThefamilyofGotiRanatookhimtomanyplaces, but due to such a large knot and lack of a maxillofacial surgeon,thepatient couldnotbetreated. The family brought him to Pacific Dental CollegeandResearchCenter,whereheshowed him to Dr. Nilesh Bhanawat, after examining, Goti Rana came to know of the disease named Ossifying fibroma, which was possible to cure by the operation. This patient's operation was risky because the patient had a hepatitis problem. Due to which there is a risk of infection. This operation was done free of cost under Bhamashah Yojana.