M.P.U.A.T. Organized many programs on the occasion of Gandhi Jayanti 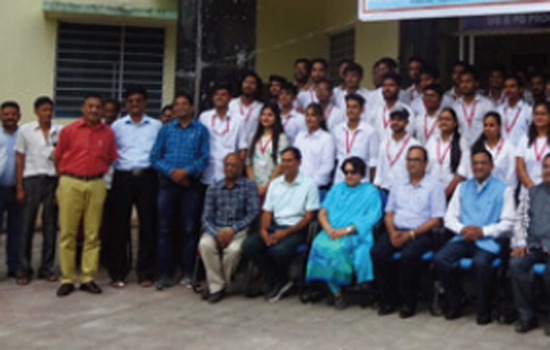 Udaipur: Severalprogramswereorganized ontheoccasionofGandhi JayantiatMaharana PratapUniversityofAgricultureandTechnology. At this occasion, a program organized in the administrative office of the university ,chaired by Vice Chancellor Prof. Narendra Singh Rathore .The event included wreaths on the portrait of the Father of the Nation Mahatma Gandhi, as well as the singing of Bapu's beloved hymns 'Vaishnav Jan To Tene Kahye' and'RaghupatiRaghavRajaRam'.Addressing the officers and staff of the university present Vice-Chancellorthrewlightonvariousaspects ofMahatmaGandhi'slifeandsaidthatGandhiji's thoughts are as relevant today as they were in his lifetime. The program was attended by the Deans of all the colleges of the university, all the directors, the total secretary and the finance controller as well as all the employees. A p a r t fr o m th e administrative office, s e v e r a l programs were also organized in all the colleges of the univers i t y, i n w h i c h b l o o d donation camps were organized in the College of Dairy and Food Technology, in which the students of various constituent colleges of the university donated blood. The blood donation camp was inaugurated by the Vice Chancellor oftheUniversityProf.NarendraSingh.Rathore Similarly,acleanlinessdrivewasorganized in the College of Technology and Engineering, inwhichVice-ChancellorDr.Rathore,Principal Dr.Ajay Sharma and senior officers of the university and a large number of students and employees cleaned the college campus with enthusiasm.Aone-day skilldevelopmentworkshop on solar equipment was organized in the electrical engineering department of the same college, in which the participants took an oath to protect the environment. Vice Chancellor, registrar and Controller of Finance along with many faculty members and students participated in this program. A program was also organized at the Rajasthan Agricultural College on this occasion in which floral tributes were paid to Gandhiji under the leadership of Dr. Arunabh Joshi, the dean of the college. On this occasion, college students paid enthusiastic tribute to the father of the nation by participating enthusiastically in Rangoli, site drawing and debatecompetitionsbasedonGandhiDarshan. A tree plantation program was organized on this occasion. Onthisoccasion, various shortplaysbased on Gandhiji's life circle were staged in the program organized in the community and social science college. On this occasion, the Principal Dr. Ritu Singhvi gave his inspirational address and administered the pledge of cleanliness awareness to all the students, teachers and employees. Students took out a rally and started the cleanliness drive by collecting plastic waste on the campus. In the program organized at fisheries College, Senior prof. Dr. B. K. Sharma`s LecturesonthelifestoryofGandhijiwereorganized in a function organized under the leadership. Along with this, the clean campus and water power campus and water power village booksreceivedfromRajBhavanwaspresented fortheinspirationofthestudents.Thestudents took an oath to abandon the use of plastic and gave shramdaan on campus. Similarly, a prayer meeting was organized to pay tribute to the father of the nation under the leadership of Dr. Kishan Lal Jeenagar, an agricultural college at Bhilwara. In the meetingorganized,lecturesonGandhiDarshanwere given by senior professors. Inauguration of the cleanliness week and plantation programs were also organized in the college premises. In the same series, Kisan Melas and seminars were organized by the Directorate of Extension Education of the university under the JalShaktiAbhiyan in selected villages affiliated to various agricultural science centers. In the program organized by Krishi Vigyan KendraBhilwaraatVillageBarana(Aasinddh), former MLAAasind Shri Hagami Lal Mewada and Dr. S.S. L. Mundra participated. A farmers' seminar was organized to pay tribute to the father of the nation under the leadership of MLA Shri Gautam Lal Meena at theKisanMelaorganizedinDharapivad(Pratap Garh). MLAShri Surendra Singh Rathore and several farmers and public representatives of the area participated in the Jal ShaktiAbhiyan in the huge Kisan Sabha organized at village Gajpur (Kumbhalgarh). A large number of farmers and agricultural women participated in the huge water power campaign organized in Sheshpur (Salumbar) under the leadership of Jallara Pradhan Smt.Ganga Devi In the program organized in the Directorate of Research, Director Research Dr. A. Mehta and senior scientists of the University by garlandingthepicturesofGandhijiandformerPrime Minister Shri Lal Bahadur Shastri