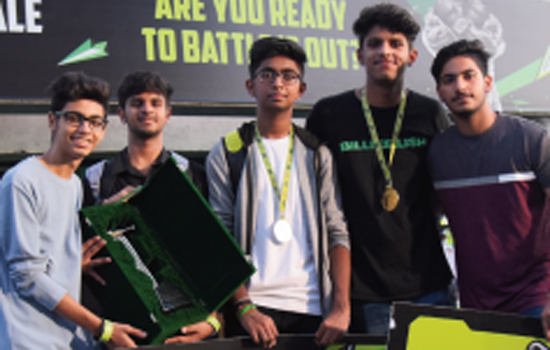 Udaipur: 6 Months. Over a million participants. One coveted title. A fitting finale. The fourth edition of Mountain Dew’s hugely successful annual gaming property, DEW ARENAculminated in a high decibel finale. This year’s edition comes on the back of three successful editions and saw participation from gaming enthusiasts across the country grow to 1.5 million, thereby becoming the largest gaming championship in India till date. The grand finale in the Capital saw the presence of popular reality television star, PRINCE NARULA, who showed off his gaming skills. Prince engaged in a friendly game-off with fans and engaged with them while playing games such as DOTA and Street Fighter. Prince said, “Gaming is gaining exponential popularity in India. It’s all around us and is soon becoming the default mode of entertainment for youth across the country. In fact, gaming provides the same kind of recognition to people today that TV gave me years ago! Platforms like Dew Arena are a fantastic way to celebrate the gaming community and build the esports landscape in India. I am very excited to be at India's largest Gaming Championship today to celebrate the next generation of esports stars” The grand finale also saw the presence of one of India’s leading PUBG players, NAMAN ‘MORTAL’ MATHUR. The 22 year old is known for his unmatched PUBG skills and has wipedoff squadafter squadsingle-handedly inthebattleroyale game. Mortal said, “Platforms such as Dew Arena and games such as PUBG Mobile have been instrumental in my journey as a gamer in India. They have allowed players like me who stream in Hindi to really connect with the masses and at the same time bring them hope that they too can break out of the ordinary and achieve a name for themselves.” Witheveryedition,DewArenacontinuestoscalenewheights while experimenting with newer trends to bring best in class experiences toconsumers.ThefourtheditionkickedoffinMarch this year and covered 220 locations across 41 cities in India. After the semi finale held on 3 October, the top 72 gamers battled it out at the finale in a bid to win from a prize pool of INR20lacs.Thethrillingon-groundencounter,featuredgames such as Rocket League and Street Fighter. Whoops! and EntityGaming were crowned the ultimate winners for DOTA 2 andCSGOrespectively,whileHargunSinghwonRocketLeague and Bhagwant Bagh won Street Fighter. SpeakingaboutDewArena,NaseebPuri,Director,Mountain Dew & Energy, PepsiCo India said, “As a brand, Mountain Dew has always aimed to bring alive new experiences for consumers across the country. Today gaming is an integral passion point for our consumers and is no longer considered niche. In fact, India is currently among the top 5 markets for gaming. DewArena has had an exponential growth of 10 times since inception. This year, we successfully doubled participation to 1.5 million from 7 lacs last year. Each year, we are building on Mountain’s Dew commitment to provide an unmatched talent platform to budding gamers. With equal participation from ESL and all our partners, we are extremely proud to bring the stalwarts of the gaming ecosystem together on one platform.” Akshat Rathee, MD, ESL India and founder, NODWIN Gaming said, “NODWIN Gaming and ESL in India are delighted to partner with Mountain Dew for the fourth year in a row. Overthis journey, DewArena has become India’s largest gaming championship. Today, we have successfully established the championship as a leading authority on esports in India that reaches out to the masses of India. What has been particularly fulfilling is the dream of making a career in esports real has manifested itself. It is no longer uncool to be a gamer. It is a badge of being cool. I truly look forward to where this journey takes us.” Building on consumer research that showed that gaming is well on its way to becoming a spectator sport, Mountain DewalsocollaboratedwiththeOTTPlatform,HOTSTAR,allowing the audience to stream the gaming experience live on their screen. Hotstar will host the online qualifiers and grand finale of the championship on the platform.