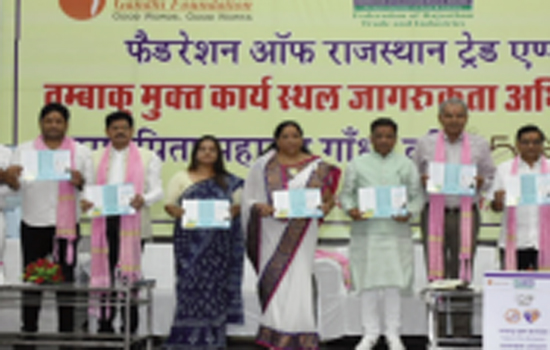 Udaipur:FortiUdaipurDivisionalFounderPresidentPravin Suthar told that Federation of Rajasthan Trade and Industry (Forti) along with Gandhi Foundation, under the chairmanship of Forti State President Suresh Agarwal initiated a tobaccofree awareness campaign on October 2 on the 150th birth anniversary of Mahatma Gandhi. Tobacco-Free Workplace Awareness Campaign at the Agrasen Auditorium Campus at the College Initiated He said that Forti is also playing a leading role in getting rid of the addiction of smoking and gutkha to society and youth withcommercial interests.OnthebirthanniversaryofMahatma Gandhi and former Prime Minister Lal Bahadur Shastri, by launching a tobacco-free workplace awareness campaign, we have successfully attempted a separate campaign to keep the youth of the country away from addiction. Thefunctionwasduly launchedbyAdarshNagarMLARafiq Khan and released the poster of the tobacco-free campaign. Alarge number of dignitaries present at the ceremony, the Forti Officers, signed an affidavit to quit tobacco and resolved to speed up the campaign. Forti Patron Surjaram Meal, Woman Wing Committee Chairman Neha Gupta, Secretary Lalitha Kuchal,Chairman ofFortiYouthWig,DhirendraSinghRaghav, AdvisoryMembersAjayGupta,KailashSharma,RameshGandhi, Guides Purushottam Agrawal, Chief Secretary Girdhari Lal Khandelwal,NareshSinghal,AdditionalGeneralMinistersAjay Aggarwal, Yogesh Bansal, Vice Chairman Nirmal Bhootia, Secretary Kailash Khandelwal, Pankaj Gupta, Joint Secretary MaheshBhagodia, head of MetropolitanTimesGopalSharma, a large number of Forti officials and students and teachers of Aggarwal PG College, Aggarwal Public School, and Agarwal B.EdCollege,AgarwalSeniorSecondarySchool,present from Albert Hall to the venue as a rally Arrived. Forti mentorSurjaram Meal said that 3700 people are dying daily due to tobacco consumption. Forti has started a tobacco-freecampaignwhichisabigchallenge.Educationandteachers also have a big role in it. The campaign can also be speeded up by consuming alcohol by consuming tobacco, only then the success of the campaign is possible. Also, Forti will continue to do such programs to further the campaign. He said that teachers at SKIT College are focusing on de-addiction