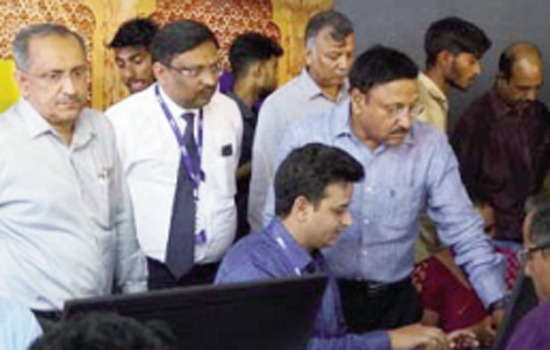 Udaipur: State Bank of India in Udaipur district, as part of a nationwide campaign to reach out to customers of public sector banks & share the joys of thefestivalafterthebank receivedatwodayeventforthedistrict'scustomerscomplited. The committee started in the Girwa campus.This is the first time since the consensus held in the meeting held in the Union Finance Ministry when so many banks are converging at one place andworkingintheinterestof consumers. State Bank of India Deputy General Manager S Vijay Kumar said that under the first phase, this is being done in Udaipur city in a series of events in 250 districtsacrossthecountry,inwhichabout 35 public-non-government banks and non-banking financial institutions Car dealers and builders participated & shared information to consumers about the various schemes and programs of the bank, it is benefiting from the loan schemes. Alot of enthusiasm was seen among the consumers and a large number of urbanandruralbank consumers reached here and took information about banking schemes. Consumers, along with knowing the process of downloading Bhima, Yono app, got the entries in Aadhar card rectified and got information about various agricultural loan schemes. Financial inclusion and digital payments and transactions were also given to the bank customers during the program. UnionFinanceSecretaryRajivKumar also came to take stock of this camp of Girwa organized in the interest of consumers and expressed happiness over the activities. He said that the result of the suggestions being made in the banking sector in the last two-three years is that now the public sector banks have become stronger and banks themselves are reaching out to consumers by taking initiative. He said that it is pleasant that after thereforms inthebankingsector,14government sector banks have also entered the profit and consumers are getting better services. In view of the enthusiasm of consumers benefiting from bank schemes, this two-day camp in Girwa has been extendedbyonemoreday.Nowthiscamp will be held on 5 October. Consumers happy with hand loan: Under the fair, each stall was decorated in a grand pandal with its own stall. On a large LCD screen, various products of various banks were being promoted and interviews with beneficiaries were also being broadcast. Banks disbursed several loans to the people through online services on the occasion.Approval of 22 housing loans, 32 vehicle loans, and 25 e-Mudra loans were issued by State Bank of India. Similarly,by sanctioning24houseloans, 15 vehicle loans, 2 education loans and 56 Mudra loans by other banks, hand overacceptanceletteralongwithaninterview of a beneficiary on stage.