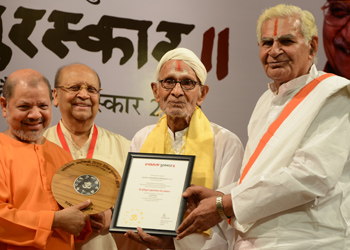 Udaipur: Inthefondmemory of Ashok Singhal, former International President of Vishwa HinduParishad (VHP ) andaflagbearerofHindutva, thethirdeditionof'Bharatatma Ashok Singhal Vedic Award' was held at the Chinmaya Mi s s ion Auditorium on Teachers' Day on Thursday, 5 Se p te m b e r b y Si n g h a l Foundation. On the birth anniversary of formerPresident,eminenteducationistandgreatphilosopher DrSarvapalliRadhakrishnan, thestudents,teachersandthe Vedic School, who performed brilliantly in the field of Vedic education were awarded and prizes worth lakhs were conferredtothem.Whilethereare manyawardsthatareinstituted attheregional leveltopromote Ve d i c e d u c a ti o n , b u t 'Bharatatma Ashok Singhal Vedic Award' is the only one that has a pan India outreach. This year around 1000 Vedic schools participated in the selectionprocessandthepanellists went through a rigorous process of shortlisting to choose the winners. On the b e h a l f o f M u n i k u l BrahmacharyaVedSansthan, ShriHari shankar Singh Sharma Jireceived the award for the best Vedic school. Harishankar Singh Sharma said, “A Vedic school doesn't just help one study theVedas, it also leads to the study of Brahmagyan, self-knowledge, all the sciences. The Veda should not be viewed from the eyes of religion. It is beyond religion. Veda based education system should be implemented in the country and Vedic schools should also be opened throughout the country. The Singhal Foundation has done a commendable job by introducing such awards. This work should not stop. MunikulBrahmacharyaVedSa nsthan is proud to have received this honour. I am always ready working with full devotion in taking the Vedas forward.It'sanhonourtohave received this award by Pa r a m Pu j y a Swa m i TejomayanandJi. This ceremony also allowed me to get theSwami Ji'sblessings..Iam very thankful to ParamPujya Swami TejomayanandJi and Singhal Foundation for felicitating me with this honour. I will continue spreading the knowledge and wisdom of Vedasintheentirecountryuntil my last breath.""Padma Bhushan Awardee Swami TejomayanandJi, the chief guest of the ceremony, said, "LakshmanJi obediently followed his elder brother Lord Ramaalloverhis life.Similarly, late AshokjiSinghal followed th e c a u s e o f Ra m JanmaBhoomi likeLakshman. These awards in his name are completely justified. Vedas guide us at every single stage of our life and enlighten us. Hence, it is important for one toseek thewisdomandknowle d g e i m pa rte d b y th e Vedas.”Singhal Foundation's trusteeSalilSinghal said,"Late AshokjiSinghalwasaflagbearer of Hindutva. He had a keen interest in the reading of the Vedas. He had complete knowledge of the Vedas. With his effort, many Vedic schools were established in the country. Watching his fondness for the Vedas, the Foundation decided to institute Vedic Awards in his memory."