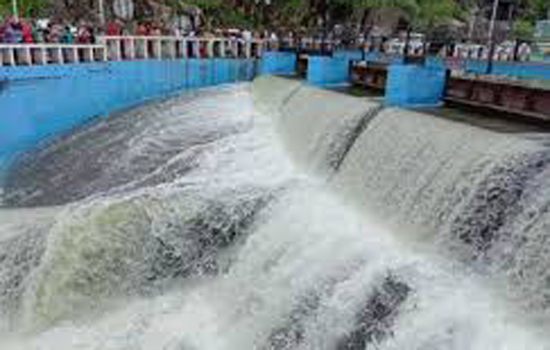 Udaipur: Udaipurites rejoiced as theirmuchawaiteddesireofseeingwater gushing out from the spillways of Lake FatehSagar was fulfilled on Monday morning. Collector Anandhi performed rituals andofficialsofthewaterresourcedepartment opened the sluice gates around 10.50 am. As the news spread, people of all ages including young and old, men and women gathered at the spillway to see the overflow. Citizens clicked selfies and posted videos on the social media greeting and rejoicing on the occasion. After water received from the intermittentrains for past few days, the water level had rapidly increased which was below the sill level a month ago. The lake is the most popular destinations of the city, be it morning walker, joggers, cyclersoreveningrefreshingdrivearound the lake or v i s it to Maharana PratapSmarak on MotiMagri, or boating andadventurewater sports,government officials staying at Circuit House or tourists staying at hotels near its shore, or trekking up the high hill to its north with Neemaj-Mata Temple. It has so many things in its bag that one cannot think of Udaipur without Fatehsagar. FatehSagar Lake is situated in the city of Udaipur in the Indian state of Rajasthan. It is an artificial lake named after Maharana Fateh Singh of Udaipur and Mewar, constructed north-west of Udaipur, to the north of Lake Pichola.