Gavri- The Incredible Play of Bhils 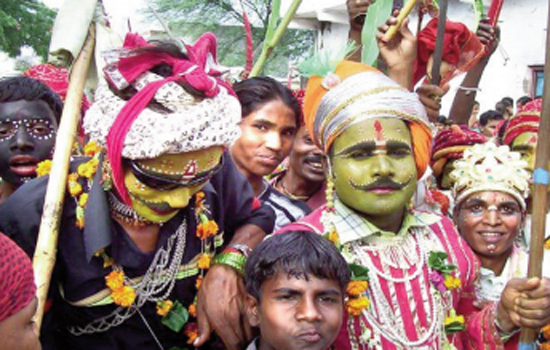 The art of enjoying life fully and at the sametimestrivinghardagainstheavyodds to survive under unfavorable conditions is a valuable lesson to be learnt from tribal people like Bhils of Mewar. During monsoon when nature is in her full bloom the Bhils are also filled with great enthusiasm and are in highly joyous mood. Their religious celebrations combine worshipwithentertainment.Whentherain gods are generous gaiety prevails in the tribal region and the Bhils begin Gavri, a dance drama on the next day after Rakshabandhan. It continues for over a month. gavri-bhil-tribe1 This folk dance is presented in the villages in which their sisters and daughters reside after marriage. Forty to one hundredpersonsparticipateinthedance. The food and stay arrangements for all these persons are made by the villagers where the programme is presented. The dancers also get gifts in the form of dresses, ornaments, cereals and animals individually as well as jointly. Individual gifts are given by ‘samdhi’ who lives in that village to the ‘samdhi’ participating in the dance. Leaving aside their work of farming during these days,Bhils remain engaged in this play from morning to evening. The players are called ‘Khelye’ (characters)and they live a very austere life and in take food only once in a day. They do not wear shoes; they don’t take meat, wine, green vegetables and new cereals and do not eat at night. They sleep on the floor and do not takebathduringthisperiod.Atsomeplaces the main character called Boodia takes only milk. Nowhere, except Mewar such a play can be seen which goes on for a period of one month with such a big group of players performing in so many villages in such an organized manner. This dance drama is performed in a circle in the centre of which a Trident is planted, the singers stand near the trident and move on dancing in the left and right of the circle. Any open platform of the village becomes the stage. The form of Shiva presented in the dance-drama is unique in itself. The five main characters are RaieeBudia(representing Shiva and Bhasmasur) the raiees representing, Mohini and Parvati, Kutkadia and Pat bhopa,allotherplayersarecalledKhelye. Kutkadia is ‘sutradhar’of this play and he relates briefly the story of each play beforeitbegins,thus theaudiencecomes to know in advance what is going to happen.Trident, Dhol, Thali and Mandal are used for music and the artistically preparedcostumesandsettingsoftheactors add to the effect of the play. These costumes are decorated with religiousandauspiciousmandraslikesun, moon, stars,peacock,‘papiha’etc.Faces ofthehumanactorsarepaintedwithgaudy colors or the masks are used. Black, yellow and red are the colors mainly used. Dark blue color is used for those players in the roles of demons, black for thieves, redforgoddessesandyellowfor‘jogi sadhus’. gavri-bhil-tribe The Gavri dance-drama of Bhils has its origin in the story of Shiva and Bhasmasur; Bhairavnath is the form of Shiva and DeviAmbavsymbolisesGauri. The character of Devi Ambav is played in a special manner, in this play the main themes are Bhanwara- ‘danav’, Kanh–‘gujari’, Badlya- hindva, KanjarKanjari, Nauratan, Hariya–Ambav, Khetudi,Kalukeer,Dharionbhil,Kalbeliya, RoiMachchla, Soor- Soordi, Kalka-devi, banjara, meena and nahar-sinhiamdnahar.Theruralfolkisthoroughlyentertained by these themes. In this folk play there are four kinds of characters –dev, humans, demons and animals. The ‘dev’ characters are completely free from vices, eternal and symbols of ideals. They can move to all the three lokas. Shiva Parvati, Kalka and Devi Ambar are in this category. Human characters include Boodia, RaieeKutkadia, Kanjarkanjari,Bania, Jogi,Meena,Natakhetudi, Shankariya, Garda, Kalbelia, Kalukeer, Banjara, Bhopa, Fatta-fatti, devar-bhabhi etc. The danavcharchetrs are Bhanwara, KhaddalaBhoot,HathiaandBhiavan.The main animal characters are Soor, Richdi and Sinha. The two days preceding the end of Gavri are Ghadavan (the first day) and Valavan(thesecondday).Everyonegoes to the village of the ‘Kumhar’ from where an artistically made sand elephant is taken in a procession to their own village. This elephant is colored in several hues. On it sits, GorjiyaDevia.Bhils believe that on this day all the gods are with them. One the next day is performed the Valavan ritual. The whole day Gavri is playedwithgreatgustoandintheevening the elephant made of sand is immersed in a neighboring lake or river. Before this immersion, the elephant isworshippedanditisofferedsugarcane, fresh maize, cucumber, fruits and vegetables. After this ritual everyone goes to ‘KhedaDevi’Gorjayatemplewhereallthe players are given gifts like clothes and ornaments by their relatives, choorma is distributed as Prasad. Only after this, the Bhils start using new crop. For Bhils, playing Gavri is not just an entertainment but there is a strong religious purpose behind this. During Gavri they appease Bhairavnath (Shiva) to grantthevillageprosperity,toprotecttheir community against diseases, sorrows, trouble, poverty and famines. Every night there is a Jagran at Bhairava’s‘devra’. This is how the Bhils have kept alive the fascinating tradition of this unique folk dance –drama all these years.