HDFC Bank completes 20 years in the state of Rajasthan 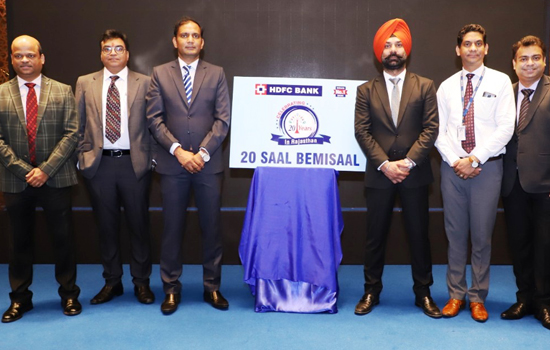 Udaipur: HDFC Bank announced the completion of its 20th -year of service in the stateofRajasthan.This#milestone makes it one of the longest-servingprivatesector banks in the state. Since the start of its #journey in the year 1999 at CSchemeinJaipur,HDFCBank hasprovidedbankingservices to 20 lakh customers in the state. It has reached the most remote parts of the state through its network of 181 branches and 367ATMs.With a presence in every district it is the largest private sector bank inthestatebringinglarge unbanked segments into the banking fold. Tocommemoratethis journey, the Bank launched a “20 SaalBemisaal” mega campaign on August 1. As part of this campaing it launched a PragatiRathYatra - a car rally that will visit multiple locations of Jaipurandeducatethepeople on sound banking practices. This Yatra is part of the Bank’s ‘DukandarDhamaka’ initiative which aims to generate awareness on digital transaction among traders, shopkeepers and customers. Over the past 20 years, HDFC Bank has not only helpedcontributetowardseconomic development and #EmploymentGeneration for the people of Rajasthan but also brought aboutrural upliftment and sustainable change through its social initiatives in the state. The Bank is actively working towards making a difference to lives of not just its customers but also the entire #community that it operates. Thebank isbringingaboutthis change through #Parivartan, the umbrella name for all its social initiatives.The underlying #philosophy behind #Parivartan is the belief that foranybusiness togrow,ithas to partner and be an enabler of growth of the society. Since the launch of Parivartan, we have impacted more than 17.09 lakh lives in Rajasthan. Speakingonthisoccasion, Mr. Jasmeet Singh Anand, Head, Branch Banking, Rajasthan, HDFC Bank said “It has been an honour serving the people of Rajasthan over the past 20 years. It is our #endeavourto make a difference in their lives through our banking services as well asinsocietyasawholethrough our social initiatives.Ouractivitieshave impacted more than 17.09 lakh people in the state so far and we are humbled by the trust and support they repose in us. We remain committed to keep serving our customerswiththebest-in-theclass services and the latest technology in the future.