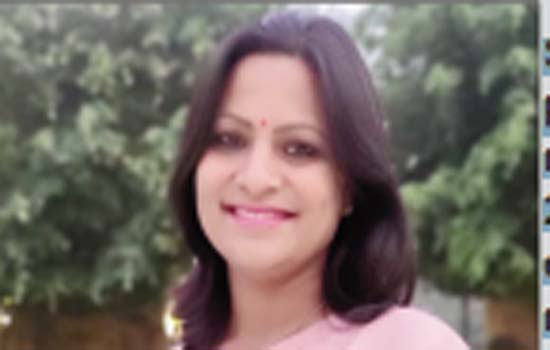 Udaipur: Shubha Surana had presented a poster on the topic yoga a medicine for diabetes in 23rd international conference on frontiers in yoga researchandit'sapplication which was organised by Swami Vivekanand yoga Anusandhan Samsthaan, Bengluru The conference was from 3-6 jan 2020. Around 1500 people including Indian and foreign delegates, students, research scholars had participated all over the world. There were many yoga expertise who too gave their oral and poster presentation. She had also been to khujurao in the month of November for one international conference which was based on techno stress .A 15 yrs experienced who did her masters in accountancy showed interest on the field of yoga. She did herfurthereducationinyogaincludingdiplomaand2Masters in yoga science and she is also NET qualified in the same field. Dedication comes up with this result. She is persuing ph. D in yoga from MLSU . From 3 consequetive years, she is doing international yoga day which is organised by udaipur district administration at Gandhi ground on 21st June every year. She was awarded for the same on 26 jan 2018 by the Collector of udaipur district. She had taken lots of session around (400+ all over udaipur including Hotels(taj lake palace, lalits, radisson, trident) , Schools(st Mary's) Corporate Offices( Wonder cement, nimbahera, secure meters, fusion outsourcing) Hospitals( GBH American, Pacific medical college and hospital) , NCC cadets and many more The list of her dedicated work is long. It's her passion to teach and sow seed of yoga among people.