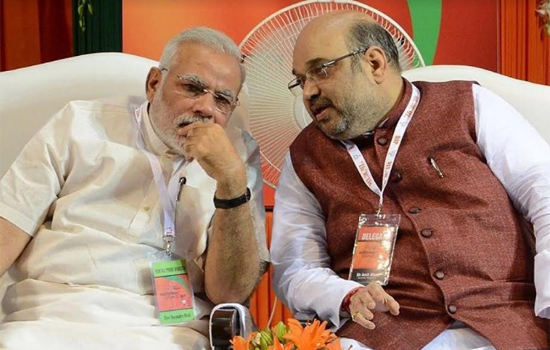 Amit Shah, considered a Chanakya of Indian politics, is an effective, miraculous political personality who has proved himself, not once, but repeatedly, with patience, perseverance, self-confidence, determination, political acumen in situations of crisis. Shah, who has become a symbol of light for the Bharatiya Janata Party in challenging ways, has flourished more in the current political scenario.
The life of Amit Shah, who learned the politics of the organization's tricks and values from the Rashtriya Swayamsevak Sangh school, has been full of political emotions, experiments and struggles. It seems that Amit Shah was made for politics, he has proved himself as Master of the same. Amit Shah, who is making rapid strides and making new records in modern politics, did go through bad phases in his life. But he is known to never give up and is known to face every situation firmly. He has mastered the ability to turn challenges into opportunities. In the era of catastrophe, as the lockdown lifted, Shah was seen hyperactive in Political activities. His aggressive activism is being seen on virtual rallies, TV channels and social media regarding elections to be held in Bihar and other places. They are fighting extensively to ensure the victory of the BJP by using modern technology and means, organizing the workers, awakening their self-respect and realization of responsibilities for the party. Presenting incisive and irrefutable answers to the attacks on the BJP.
Amit Shah is the staunch leader of the BJP and holds the post of Home Minister in the current Narendra Modi government. Amit Shah is such a unique personality with whose support the BJP has turned an impossible victory into a possible victory in many states. The BJP has also won the victory in states where the party's hold was weak. Shah has been in politics for many years and is well versed in politics. No matter what the situation in front of him, he never gave up. Today, he has worked very hard in his life to achieve his position in BJP, he has flourished in many struggles. Shah has not only emerged as a new dawn, new hope and new inspiration for BJP, but has also proved to be a new inspiration for the people of the country. These days, he is working to present the achievements of the Narendra Modi government in an effective manner to the public, be it about the surgical strike, freedom from triple talaq, effective steps taken towards the liberation of Corona or abolition of Article 370.
Amit Shah walking through crooked, bumpy paths has worked intensively to inculcate BJP's spirit in the non-BJP states which is when Most of the people of the country have realised the in depth meanings of his nationalism-inspired politics. Even though political life has given Shah many accolades, he has witnessed many failures, shaken by the criticism he received in every walk of his life.
Not only did Amit Shah cherish the innings of the BJP president with historical achievements, but now as Home Minister, he has effectively inflicted on the issue of  Kashmir and terrorism and has led India to become a nation of peace. Government decided to remove Article 370 from Jammu and Kashmir. With this, a significant part of Jammu and Kashmir was added to India. With the removal of Article 370 from Jammu and Kashmir, new rules and laws were made there and a state was added in India. With this, Ladakh and Jammu Kashmir were also separated. Apart from this, Shah also raised the issue of NRC to eliminate terrorism from the country. Through this, he talked of expelling those Bangladeshis who were living in the country illegally for a long time. Along with this, he also investigated the citizenship of the people of Assam to identify foreigners living in Assam. Even on Naxalism, Amit Shah made such a strategy due to which the Naxalites had no way but to surrender. In my view, Amit Shah's political undertaking and endeavor is a light that is becoming a solution to problems like violence, terrorism, Naxalism, Maoism.
Winning or losing elections goes on and on in a democracy, but achieving the goal of winning only in elections is possible only for a brilliant politician like Shah. Amit Shah made the work force organized and effective, giving the BJP the distinction of being the largest political organization in the world. Emphasized the politics of values and nationalism. If the BJP has managed to bring the conceptual form of nationalism to the heart of the people, then it is largely attributed to Amit Shah. He has addressed the people of Bihar and played the trumpet in the state assembly elections, he has become a serious challenge for other political parties. At the moment no one can stand in front of his political stature and skill.
Amit Shah has been continuously active after the BJP came to power in 2014. As soon as elections are accomplished for a state, he focuses his attention on another state.  Amit Shah has a good test of workers and is an expert player in organization and management, his political skills and maturity are the basis of BJP's energy. At the completion of one year of Narendra Modi's second term, Amit Shah established a dialogue between the Bihar workers and the general public, showing that no matter how difficult the circumstances are, they will not allow the spirit to weaken. Amit Shah has established his place as the power of BJP in the history of Indian politics. Constantly striving to improve India's political and socio-economic scenario thus changing the face of Indian society.