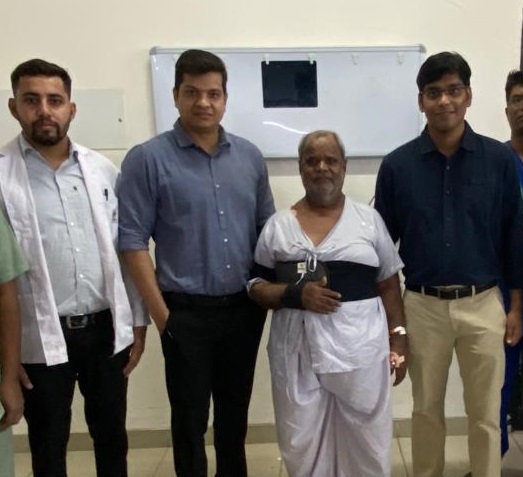 Udaipur. The patient's frequent shoulder pain was relieved by joint replacement and reverse solder replacement in the Orthoscopic Department of GBH General Hospital. According to the surgeon, this type of operation has been selective.
Jagdishchandra (65), a resident of Gujarat, used to have frequent shoulder fall, which he got operated on in Ahmedabad, but after a few days, this complaint started again. On this, the family reached out to see Dr. Suryakant Purohit, Joint Replacement and Orthoscopic Surgeon of GBH General Hospital. Here, MRI and other tests found that all the ligaments running the shoulder were torn. Because of this, the complaint persisted. The only option was reverse solder replacement. On this, a team of Dr. Prashant Gupta, Dr. Anil Patel, and Dr. Piyush Garg from the Department of Anesthesia was formed under the leadership of Dr. Suryakant Purohit. He prepared the joint upside down in the reverse solder replacement technique. Instead of the ball of the shoulder, a cup was put in place of the ball and a ball was put in place of the cup. It does not require a ligament, and the shoulder starts working as before. After a complicated surgery that lasted about three hours, the patient returned home after recovering completely. Dr. Suryakant Purohit claims that this operation has been done selectively in the Udaipur division.