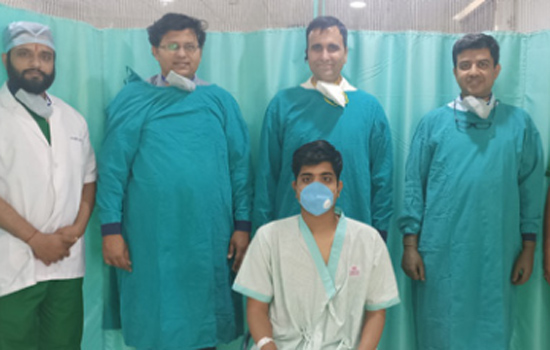 Udaipur: Successful surgery for ulcerative colitis disease of 18-year-old patient of Pratapgarh was done by Gastroenterology team of Geetanjali Medical College and Hospital, Udaipur. This surgery is usually available only in a few centers in metro cities. In this highly complex successful treatment team, G.I. Surgeon Dr. Kamal Kishore Vishnoi, Gastroenterologist Dr. Pankaj Gupta, Dr. Dhawal Vyas Dr. Manish Dodmani, Dr. Sanjay Paliwal and Team from Surgical ICU, Dr. Charu Sharma from Anesthesia, Endoscopy Incharge Sanjay Somra, OT Incharge Hemant Garg, Ward Incharge Manju, etc. contributed to successfully carried out the operation.
What was the issue?
In the last 3 months, the patient said there was bleeding during the bowel movement, due to which he had to suffer from stomach ache, weakness, lack of blood in the body, etc., he showed in a private hospital in Mandsaur. The condition did not improve, then the patient was admitted to Geetanjali Hospital, Udaipur.
Dr. Kamal said that this patient had a rare, large intestinal disease with ulcerative colitis. This disease mainly occurs in the large intestine but can also occur in other parts of the body. Symptoms of this disease mainly include diarrhea, bleeding in the stool. The disease can be controlled with medicines, but it can be eradicated from the root by surgery. In this condition, the patient underwent total proctocolectomy and ileal pouch-anal anastomosis. It is a complex surgery in which the large intestine is cut before the anus, and the small intestine is shaped differently to form a new anus.
This surgery was completed in two phases.
1. In the first stage, the large intestine was cut over the anus, and the last part of the small intestine was made into a pouch and added near the anus.
2. In the second phase, the patient was put on ileostomy for one month after surgery so that the J pouch can be healed quickly.( In an ileostomy, a stoma has been made in the lower right side of the abdomen by making an incision in the stomach of the patient so that the waste can be collected) This stoma will be removed after one month so that the patient will discharge feces like ordinary people.
In this way, the patient successfully underwent surgery and was discharged after one week. Today the patient and his family are thrilled. Geetanjali Hospital CEO Prateem Tamboli said that all the advanced techniques related to gastroenterology at Geetanjali Hospital are available in the endoscopy unit. Geetanjali Hospital has continuously provided excellent and world-class medical facilities of all kinds and health services to the needy.