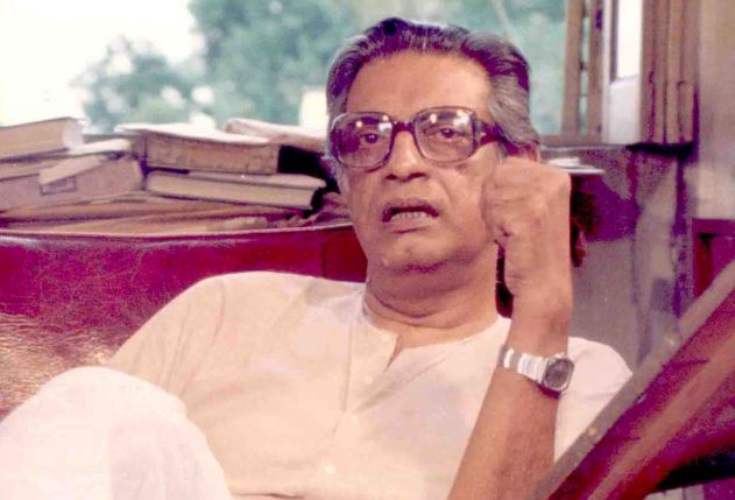 He shot his films according to my vacations, so my mother and I could be with him. ...these vacations became an opportunity for me to imbibe his filmmaking acumen, remisces Sandip Ray


“I remember him as an affectionate and caring father, though the onus of bringing me up , taking care of all my day-to-day requirements fell entirely on my mother.She looked after my school, myhomework everything while my father was busy making movies. Though he did care a lot about what went on in my life. Oh yes, he was definitely a family man. He always wanted us to be near him. So what he did was to plan all his outdoor shootings around my school holidays.


Yes! He shot his films according to my vacations, so my mother and I could be with him. More than the chance to be with my father these vacations became an opportunity for me to imbibe his filmmaking acumen. I guess I began observing the Master at work at at a time when other children are only bothered with games and homework. My three mandatory school holidays during my growing years—the summer, winter and Pooja holidays—were devoted to watching my father shoot his great works. I was there at the shooting of his first film PatherPanchali though too young to understand what was happening. No one knew it would become such a timeless classic. We all looked at the shooting as a picnic.


We knew he was working on something different. But we were all more enamoured of the wonderful rural Bengali outdoors. I can still remember the hut where the film was shot and that railway track with the steam engine chugging on it. They don’t make steam engines or movies like PatherPanchali (1955) any more. I also remember being present for the shooting of ParasPather (1958).There was this marvellous party scene featuring TulsiChakraborty in an immaculate suit and several other stalwarts of the Bengali film industry, and there was this huge crane with Baba’s regular cinematographer SubratoMitra and Baba perched on it. That memory remains vivid.


When did I decide I’d like to make films? I don’t know...I was always keenly interested in the post-production aspect of filmmaking, particularly editing. I still consider editing to be my first love. According to me, that’s where the film takes shape. Seeing the rushes on the moviola and watching Baba cut the film fascinated me. Those aspects fascinated me. I think in my growing years there were more advantages than disadvantages to being Satyajit Ray’s son.


I was treated very normally in school. Only later in fact recently I find I am being constantly being compared with him. But it’s all right. People do expect a lot from me as a filmmaker because of who my father was. But I don’t let those expectations bog me down. If I thought about it I’d have done nothing in life. I think most critics are satisfied with me. I think I was a very good student of Satyajit Ray. But I couldn’t ask him too many questions , as that would’ve disturbed him. So I’d address all my queries to members of his crew. They helped me understand his craft. I was completely fascinated by hisworking method. I’d say I have inherited his method of shooting.


Like him I do extensive homework before shooting. In any case one has to be well-prepared before shooting since filmmaking has become very expensive...After I grew up Baba and I became friends. We shared a common passion—cinema and spent a lot of time discussing it. I’d show him the first cut of my film, though not the entire film. But he’s never come for my shootings nor for the editing. You know how the film industry is? Before I knew it they’d have said my father made all my films.


But I did show him my films after they were complete. He was very satisfied with what I had done in GupiBaghaPhireElo (the third part of the GupiGayenBaghaBayen trilogy). I was very relieved. Baba was my censor board. Once he said it was okay, I was fine. I remember when he saw my first film he didn’t say whether it was good or bad. He only advised me to run through it myself and see where I had gone through. As a filmmaker his one advice to me was to view both good and bad films.While the good taught you what to do the bad taught you what not to do. Another very interesting advice from him was to be unsentimental about what I shoot.


‘You may love a particular shot. But if it doesn’t move the story forward throw it out because it’s a useless shot.’ If you see his film they absolutely fat-free. There are no superfluous moments in his cinema. In some of his best works like Aranyer Din Ratri he shot extensively and the film got lengthy. He ruthlessly cut away the footage.That’s where my fascination for editing came in. I could see how he was tailoring his films to make them precise and succinct....I think the successive generations of directors who are Baba’s fans are doing great work.In fact Dibakar Banerjee has shot one of my father’s short stories in Bombay Talkies. Dibakar is deeply influenced by my father.He is a very straightforward and no-nonsense man. He suddenly came to ask for the story. I was very happy to talk to him.


He promised to be true to the story and I believe he has. He did tell me he was relocating the story from Bengal to Mumbai.I am happy to know not much has been lost in the translation.Another one is AshutoshGowariker. SujoyGhosh is also a fanatic fan of my father. He also plans to shoot one of my father’s stories. He came down to ask for the story. Sujoy is a funguy.When these filmmakers ask for rights to my father’s material I only give them the Hindi rights. I try to do justice to his Bengali stories. I’ve filmed Baba’s Feluda stories. My last film was an anthology of three ghost stories, two of them were my father’s stories. But I’d never dare to remake any of his films. It would be a futile exercise.


My favourite works of my father? Oh, there are many. Keeping the Apu Trilogy aside, I’d say Kanchenjunga is absolutely awe-inspiring.It was far ahead of its time. Then Aranyer Din Ratri was such a sublime films, then of course Charulata, Jana Aranya(for its black humour) and GupiGayenBaghaBayen. And of course the Feluda films. As for Baba’s Hindi films I liked ShatranjKeKhiladi but I loved Sadgati (featuring Om Puri and SmitaPatil) even more. One of the most hard hitting films ever made, still very relevant. The Information & Broadcasting ministry had organised a wonderful tribute and created a museum of artifacts in my father’s memory on the occasion of 100 years of cinema.


We were thrilled to hear about this. We’ve plans to do more in memory of my father in Kolkata and also in Mumbai I don’t have film prints of all of Baba’s films. Because they belong to different producers. Even the DVDs of his films that I have come from abroad.Luckily the Criterion Films company in New York have come out with a restored version of Jalsaghar which is stunning.They’re also bringing out the ApuTrilogy.Sadly in India we’re celebrating a 100 years of Indian cinema and most of masters’ works are missing.It took a Martin Scorsese to restore Uday Shankar’s Kalpana. Most of the Bengali masterpieces are lost.Iam happy Baba’s films are safe ...in the West and the Ray Society.But films by RitwikGhatak and MrinalSen are gone.”