Growing Unity between Farmers and the Laborers is a Ray of Hope : Medha Patkar 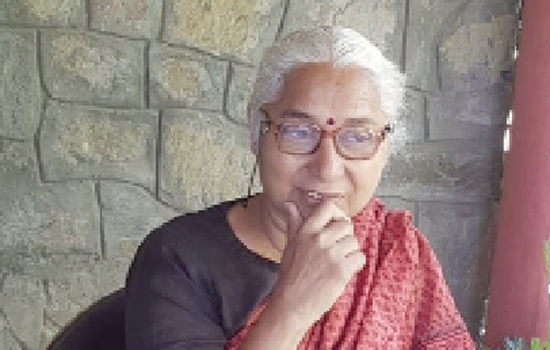 Udaipur, In order to strengthen the farmer’s protest movement and to carry its message across the country “Mitti Satyagraha Yatra” was taken out by the activists of the country in the month of March and April, 2021. One group started from Badwani in Madhya Pradesh and the other from Dandi in Gujarat where Mahatma Gandhi had broken the Salt Law imposed by the British imperialist government on India.  The march from Badwani was led by Ms. Medha Patkar, leader of Narmada Bachao Andolan and the one from Dandi was led by socialist leader and President of Kisan Sangharsh Samiti former MLA Dr.Sunilam. The march travelled across twenty three states and collected soil from sacred land of sacrifice for the freedom movement of India and other peasant protest movements. In Udaipur the local unit of People’s Union for Civil Liberties , CPI, CPIM, CPIML , Janatantrik Vichar manch and a number of social and democratic organizations organized a meeting at Comrade Mahesh Sharma’s Cottage which was addressed by Dr.Sunilam, Comrade Shanker lal Chaudhary of Samyukt Kisaan Morcha , Ms.Guddi. Ms. Usha and members of the Yatra Team. Ms. Medha Patkar was also on the dais but she was not feeling well due to heat and fatigue of a long journey. She had to be given medical help and was taken to Astha Training Centre, Bedla where she took rest for the night and left for the completion of Yatra next morning. The soil of all the states was taken to Delhi and a memorial was formed in the memory of Peasants who laid down their lives for the farmer’s movement. Before embarking  on her journey from Udaipur she spoke to Dr.H.S.Chandalia on some issues related to the farmer’s movement. Here are some of the excerpts:
Q. What is the objective of “Mitti Satyagraha Yatra”?
Medha Patkar: The objective of this Yatra is symbolic. It is meant to convey the message of the farmer’s protest movement to every nook and corner of the country. This is to carry the message that now it is no more a movement of the farmers alone, it has become a mass movement. Just as Gandhi ji started satyagraha to oppose the unjust laws imposed by the British, this yatra is taken out to let people understand the dangers of the three draconian laws of the central government.
Q. Is the farmer’s movement losing its strength?
Medha Patkar: No, not at all. On the contrary it is expanding in those states also where it was not there earlier. Punjab, Haryana, Uttar Pradesh, Madhya Pradesh and Rajasthan were already there but now farmers from Karnataka, Kerala, Tamilnadu, West Bengal etc. are also joining hands with the agitating farmers.
Q. Are farmers isolated? Why common man is not able to identify himself with the protest movements?
Medha Patkar: Farmer’s movement is well organized and strong. More than five hundred organizations have risen up in support of farmer’s movement. The best thing that has happened now is that the trade Union Movement of this country has now come in support of the farmer’s movement. The Sanyukt Kisan Morcha leaders are having talks with the Trade Union leaders. First time this has happened and it is the first time that a unity is getting forged among the working class of this country. This is a ray of hope. Truly speaking, now the struggle is not against the Union or the state governments, it is against the capitalist and corporate class of this country which is running the country from behind the screen.
Q. What shall be the strategy of the Farmers movement?
Medha Patkar: The strategy is very clear- No going home till the Three Laws are withdrawn. Farmers will continue to protest at the borders of Delhi. The struggle will continue till the three farm laws are withdrawn. Now it is a struggle to save the constitution, to save democracy and to save the nation. Where elections are going on the Kisan Morcha leaders are going and appealing the people to vote against BJP. If we have to save the country, we need to overthrow this government.
Q. How will the challenge posed by the nexus of the state funded by the capitalists and the media supported by them will be met?
Medha Patkar: It is true that the real struggle is against them only. We have to fight against the loot of nation’s resources by the corporate. Those corporate who help political parties in elections succeed in getting policies framed in their favour and their own media houses keep on harping the propaganda of the policies of the state. In order to face this challenge a strong network of people’s organizations and an alternative media is the need of the hour. Farmer’s movement has successfully done this. Despite the incessant propaganda to demonise the farmers by calling them Khalistanis, Maoists, Naxalites, anti national and what not, the state could not defame the movement. The Red Fort incident was planted by the ruling party in the union government in Delhi.We will have to build up our own media, use social media platforms, buils social democratic organizations and face this challenge. For the present I have to join the Yatra, reach Delhi and build the Farmer’s Memorial. But I am confident that we shall struggle, and the people of this country shall win.