The meaning of the schemes is only when the concerned get benefits - Dr. Raghu Sharma 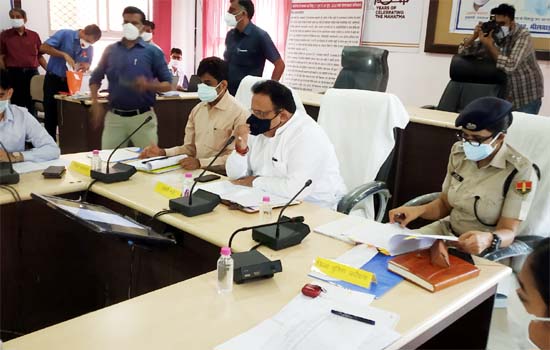 Bhilwara: District In-charge  Minister, and Medical and Health and Minister of Information and Public Relations Department, Dr. Raghu Sharma, said that the state schemes are meaningful only when their respective beneficiaries can benefit.
Dr. Sharma told the district level officials that the progress report of the schemes reflects their success. That is why, after making complete preparations with the updated progress report of the plans of your department, come to the meeting. He said that the Chief Minister's instructions are that other departments' schemes should not be interrupted during the Corona period. He reviewed the Chambal Project, Ajmer Vidyut Vitran Nigam Limited, Public Works Department, Municipal Council, Medical and Health Department, Zila Parishad, Education Department, Social Justice, and Empowerment Department, City Development Trust, and State Government Flagship Schemes. During the meeting, District Collector Mr. Shivprasad M. Nakate, District Superintendent of Police, Mrs. Preeti Chandra, ADM Mr. Rakesh Kumar, Acting ZP CEO Mr. N.K. Rajora, Deputy Forest Conservator D.P. Jagavat, SDM Riya Kejriwal, and all other departments were present.The minister in charge said that there is a need to be vigilant about other severe diseases and seasonal diseases during the Corona period. Apart from making proper arrangements in every hospital, treatment should be provided to the people through a mobile van. He was instructed to achieve 100 percent target of vaccination and to develop model CHC in each assembly constituency from MLA Fund, to train staff for special investigations. Instructed to take concrete action against the samples' shopkeepers found to be impure from the samples taken under the war for purification.
Appoint personnel to clean toilets in villages:
While reviewing the Zilla Parishad plans, Minister-in-charge praised the scheme MNREGA, which provides daily employment to the migrants during the Corona period. Under the scheme, Bhilwara also praised the best performance across the state. He had instructed to increase the average employment day, maintain average payment, and start an impressive campaign to make job cards of scheduled castes, tribes. To clean the community toilets built under the Swachh Bharat Mission in the villages.He also asked to appoint cleaning personnel through NREGA. He also gave instructions to provide a separate toilet for girls in government schools.   Directing the officials of the Department of Mines and Medicine, Minister-in-charge said that efforts should be made to prevent the spread of silicosis disease among the people working and residing in the mining areas. The mine owners should be asked to arrange the mine workers' health checkup and take measures to avoid this disease. Special care should be taken to ensure that no victim remains deprived of the state government's financial assistance.
The minister in charge gave instructions to the officers of the Social Justice and Empowerment Department to organize special camps to provide relief to the Divyang by providing artificial limbs and other accessories. He asked to prepare the camp plan in the same manner by collecting the data of Vidhan Sabha wise persons with disabilities. Describing the Palanhar scheme as a boon for impoverished children, he said that not a single eligible child should be deprived of this scheme.    Minister-in-charge expressed displeasure over the incidents of illegal gravel mining and transportation in the district and said that there is a need to discourage the gravel mafia. Instructed to patrol the gravel mafia through special patrolling of police stations adjoining Banas river, effective action of the Mines Department's Vigilance team, and a hefty fine as per rules by Transport Department. He said that due to the gravel mafia development, complaints are being received about an increase in crimes in rural areas.