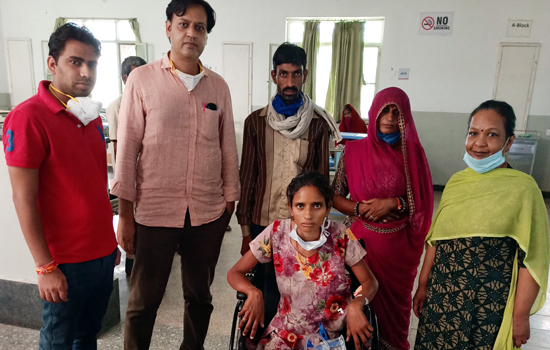 Udaipur: The successful operation of a woman suffering from a rare disease called diaphragmatic hernia was performed at Pacific Medical College and Hospital, Bedla. The operation was carried out by the team of advanced laparoscopic surgeon Dr. Vishwas Johri, Dr. Dhawal Sharma, anesthetic Dr. Ravindra, Dr. Nikita, and nursing worker Ajay Chaudhary.
In fact, 21-year-old Poonam Gurjar, a resident of Manoharpura village in Rajsamand district, suffered from congenital malformation called diaphragmatic hernia five years. Due to this, the patient had complaints of weakness, dizziness, difficulty in eating, and excessive vomiting. The family showed Poonam many places. The patient had been operated on twice before, but he was not successful. The family brought him to the Pacific Hospital Bedla, where he consulted surgeon Dr. Renu Ranka and showed him to Dr. Faith Johri. Poonam detected a diaphragmatic hernia, which was possible to be treated by operation only after checking the CT scan.
Laparoscopic surgeon Dr. Vishwas Johri said that there was a sizeable congenital hole in the muscle separating the patient's chest and abdomen, called the diaphragm, due to which the entire stomach and spleen of the patient had gone to the chest and the heart body. The heart had gone from left to right. During the corona lockdown, the patient's health worsened, and he began to have frequent vomiting and lowered blood pressure coffee. But due to the team of high-level doctors and excellent facilities at Pacific Hospital, it was possible to perform such complex operations.
Dr. Johari said that after the operation, Dr. Ramakant in the intensive care unit and Dr. Nandkishore in the ward took full care of the patient and Dr. Jagdish Vishnoi of the Medicine Department, fully controlled the patient's blood pressure and electrolytes.
This type of operation costs about one and a half to two lakhs. But due to world-class facilities and affordable rates in the Pacific Hospital, the treatment of such complex diseases has been possible. The family thanked the chairman of the institute, Rahul Agarwal. Significantly, the Pacific Medical College and Hospital Corona are fully committed to the treatment of patients in epidemics.