Govt will act as facilitator for all stakeholders in achieving target of 5 trillion dollar economy: FM 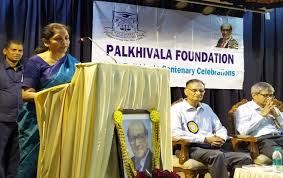 Finance Minister Nirmala Sitharaman has said that the government will act as a facilitator for all stakeholders in achieving the target of five trillion dollar economy. Delivering the Nani Palkhivala Centenary lecture in Chennai, she said the target of India becoming a five trillion-dollar economy is not an abstract thinking but a practical one. Ms Sitharaman said Modi Government believes in transformative growth and not in incremental growth. Finance Minister said the phenomenal rise in digital transactions in the country has inspired the whole world.

Ms. Sitharaman said, the Centre will spend over a hundred lakh crore rupees on infrastructure in the next five years. Referring to the disinvestment in public sector undertakings, she said it is aimed at making sure that they are run as efficient enterprises. Finance Minister said the Indian economy is rules-based and not opaque.