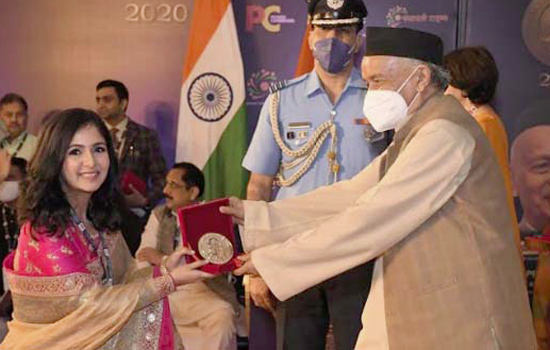 Mumbai: Renowned Acneologist Dr. Suyomi Shah, MD Dermatologist and Certified Trichologist (IAT Australia), has been felicitated with the prestigious National Award “Champions of Change 2020” by the Interactive Forum on Indian Economy (IFIE), a non-profit recognized by Govt. of India, for her exemplary achievements. Dr. Suyomi Shah, who is popularly known as Dr. Su, received her award from Shri Bhagat Singh Koshiyari, Hon'ble Governor of Maharashtra & Goa, who was the Chief Guest at the Champions of Change Awards ceremony held in Goa.
Dr. Su’s followers refer to her as an Acneologist, a moniker that she has rightfully earned through her hard work, was among the many luminaries who also received their awards at the gala ceremony for their contribution in various fields including their efforts in India’s fight against the pandemic that has rocked the nation. She was the youngest amongst all the awardees.Some of the other prominent awardees included Shri Pramod Sawant (Hon'ble CM GOA), Shri Shripad Naik (Hon'ble Union Ayush Minister of India), Raj K Purohit (Indian Politician), Suresh Jain (India politician), M.K Stalin (Indian Politician, Tamil Nadu), Sonu Nigam, Hema Malini, Sushmita Sen among several others.Speaking on her spectacular achievement, Dr. Su said, “It is a great honour to be called a Champion of Change. It is the validation of the confidence that I have in my work and I am so grateful for all the appreciation from my followers around the world. I sincerely hope that I am able to reach out to as many people as possible and help relieve them from the immense trouble they have to face in life due to acne.”