Kafan covered the greed of human 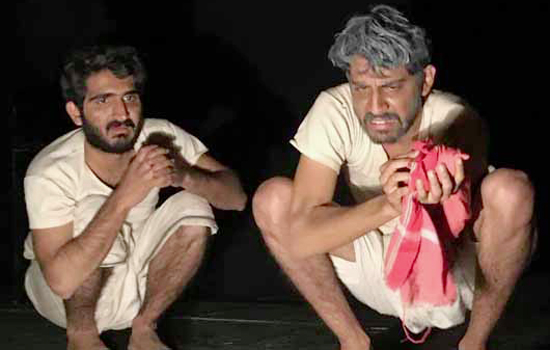 Natyansh Society of Dramatic and Performing Arts, Udaipur organized a theatrical evening on Sunday. They staged the story ‘Kafan’, originally written by the famous Hindi writer Munshi Premchand. Following the Covid-19 protocol guidelines, audience was limited to only 20 members.
Munshi Premchand’s story Kafan was converted into a play by Amit Shrimali who also directed it. This extremely engaging plot based on human psychology, travels through various topics of poverty, unemployment, and impractical system of society that makes a human being selfish, irresponsible, ignorant and even toxic. So much that he uses the money obtained to buy a shroud for the dead daughter in law into buying alcohol, cigarettes and other such things. To justify his wrong doings the character accuses the customs of society and says that how bad these customs are. One who didn’t get a piece of cloth to cover the naked body when alive, requires a brand-new shroud when dead.
About the Story
Madhav’s pregnant wife is suffering from labor pain while Ghisu and Madhav – father and son – sit carefree beside fire waiting for the woman to die and give them some peace. When the woman finally dies, first they lament and howl, then they go to arrange some money to buy wood and shroud. They wander around all day, then instead of buying the shroud spend the money into buying alcohol and food. They lose all their consciousness into the drunkenness. In this way the story portrays a picture of conservative rural life and barbaric behaviour which is the very truth of the societal system.
In the play, father’s (Ghisu) character was portrayed by Raghav Gurjargour, son (Madhav) by Chakshu Singh Rupawat. Music arrangement was done by Mahesh Kumar Joshi and Isha Jain which was operated by Mohammad Rizwan Mansuri. Lights were operated by Agastya Hardik Nagda. The backstage team who contributed in the success of the program included Fiza Batra, Dheeraj Jhinger, Bhupendra Singh Chauhan, Raman Kumar, Piyush Gurunani and Daud Ansari.
Program coordinator Mohammad Rizwan Mansuri told that it is the third live performance by the team after the lockdown due to Covid-19 pandemic. Further, he said, that the organization will keep working on such performances.