The birth of Lord Krishna 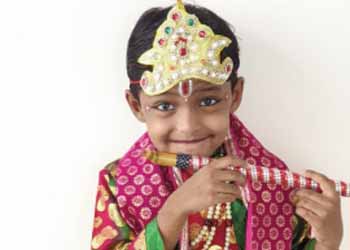 The birth of Lord Krishna, the eighth avatar of Vishnu, is celebrated as Janmashtami in India. It is being celebrated today across India with much fervour. Also known as Krishna Janmashtami or Gokulashtami, it is an important Hindu festival. It is believed that Krishna — considered to be the most powerful of Vishnu’s incarnations — was born in a dungeon in Mathura where his parents were imprisoned. Owing to a threat to his life, he was swiftly and surreptitiously taken to Gokul to be raised by his foster parents. According to the Hindu calendar, the festival is said to be celebrated on the eighth day (ashtami) of the Krishna Paksha. Many events take place to mark the important occasion including dance-drama enactments of the life of Krishna according to the BhagavataPurana (such as Rasa lila or Krishna Lila), devotional singing through the midnight when Krishna was born, fasting (upavasa), a night vigil (ratrijagaran), and a festival (mahotsava) on the following day. Itis celebratedparticularly inMathuraandVrindavan,along with majorVaishnava and non-sectarian communities found in Manipur, Assam, Bihar, West Bengal, Odisha, Madhya Pradesh,Rajasthan,Gujarat,Maharashtra,Karnataka,Kerala, Tamil Nadu, Andhra Pradesh and all other states of India