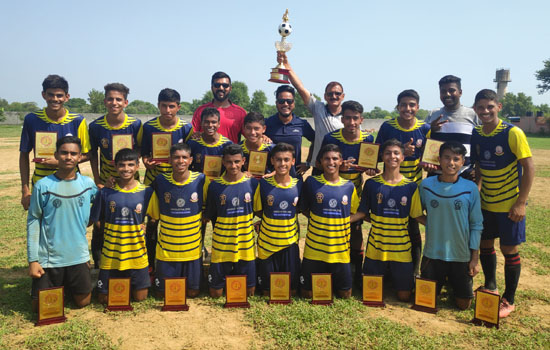 Udaipur: The youth team of Zinc Football Academy representing DAV HZL School (Zavar Mines) created history by winning the Under-17 Pre-Subroto Cup Nationals for CBSE Schools held at Bhuna, Haryana. Principal Harbans Thakur of DAV HZL Senior Secondary School, Javar Mines said that onthebasisofhisgreatperformanceinthis competitionplayed among 15 CBSI National Schools Teams, the Zinc Football Academy team won the right to represent CBSI in Subroto Cup Internationals. Did it The Subroto Cup is to be held in New Delhi from September 7. Inthefinal,DAVHZLSchooldefeatedVishwasNAVSharda Public School 2-1. However, the title did not come easily for the DAV school as the local school scored the first goal of the match, taking advantage of the ambitions of their home audience. Striker GauravMeena equalized the score before halftime. In the second half, there was fierce competition between thetwoteams.GauravputDAVSchoolaheadonAmanKhan's brilliant through ball pass. GoalkeeperAnsaiGoyari proved to be the hero of the match as he wasted a number of attacks in the final moments and did not give the hosts a chance to equalize. Zinc Football Academy head coach Suresh Kataria said that earlier, the 16-year-old DAV HZL boys placed in GroupB beat Amenity Public School of Uttarakhand 2-1 in their first match and then they're second In the match, Uttarakhand's SMS Dutta Memorial Public School was defeated 3–0. In the final group match, Udaipur players had to draw 1-1 against Shah Satnam Public School in Ganganagar. In this way, this team qualified for the semi-finals while staying on top in their group. In the last 4 rounds, DAV HZL School defeated SCR School of Gurugram unilaterally. The Subroto Cup is organized by the Indian Air Force in collaboration with the Ministry of Youth and Sports Affairs, Government of India. It is the most popular inter school footballtournamentinthecountry.Thetournament startedin1960, holdspre-primary inter-schooltournaments inevery stateevery year. These events are held at the subdivision, district and divisionlevel.AfterwinningtheStateInter-StateChampionship, the school teams are entitled to participate in the mainSubroto Cup tournament to be held in Delhi.