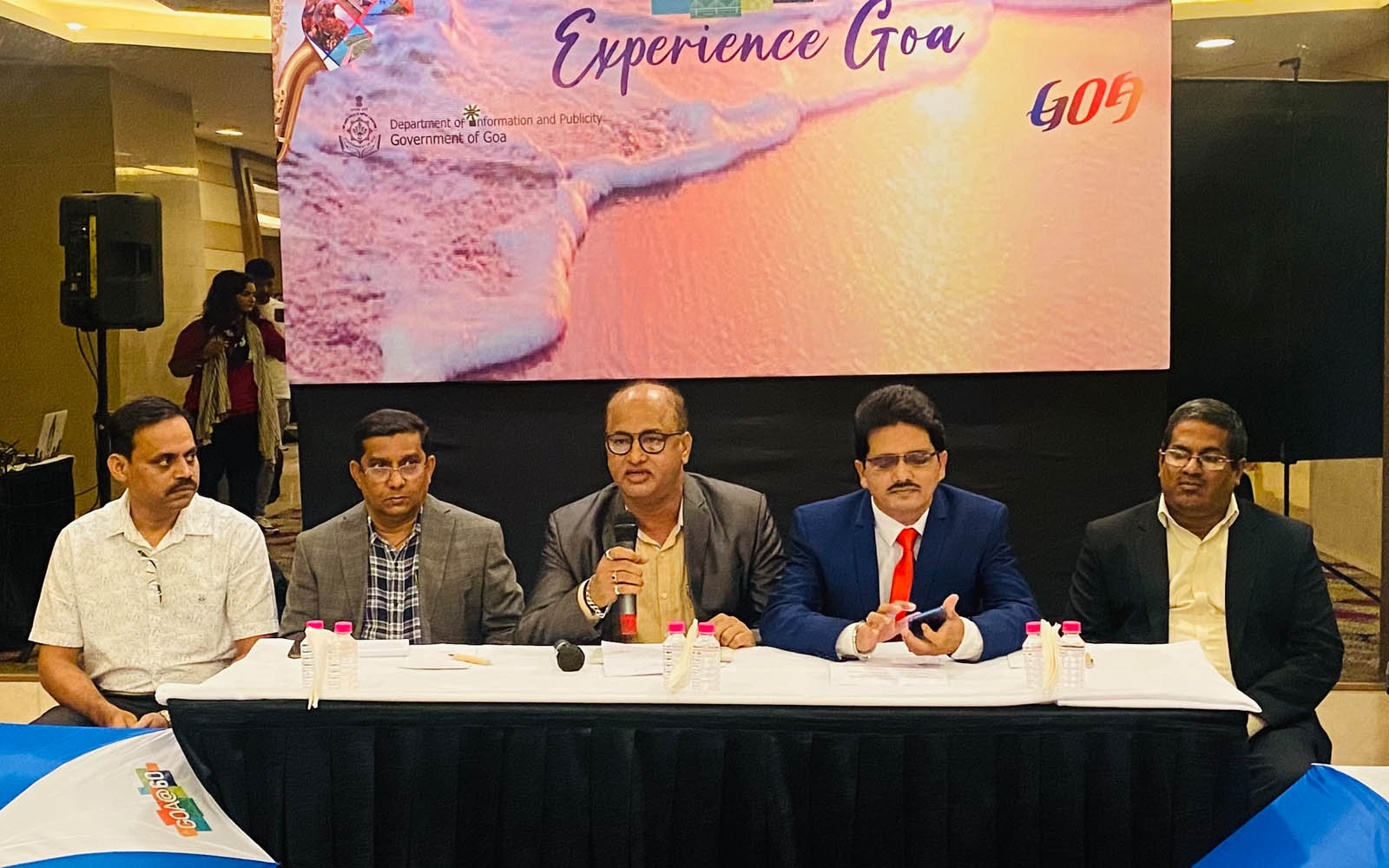 Udaipur : Celebrating 60 years of liberation from Portuguese rule as well as multifaceted growth of Goa till now, the Government of Goa hasorganised an extravaganza - ‘Goa@60’.Government successfully celebrated the Diamond Jubilee of its Liberation with events organized since December 19, 2021, in the distinguished presence of the then President of India, Shri Ram Nath Kovind, followed by events presided over by Hon’ble Prime Minister of India Shri Narendra Modi. This information was given by Rajesh Kale, Deputy Director, Goa Tourism Department, PTDC Deputy Director General Deepak Narvekar, Information and Public Relations Department Goa Public Relations Officer Olvin Pereira, Tourism Department Goa Assistant Director Rodlin Maskonas and Assistant Public Relations Officer Goa Kiran Munankar in a press conference held on Thursday.
After spectacular celebrations in Goa, Government of Goa along with the people of Goa are to take these year-long celebrations across the country. Starting from Ahmedabad, this
nation-wide celebration has now come to city of lakes, Udaipur for the second phase of its celebration and will take place from 16th September to 18th September at Celebration Mall, NH-8, opp. Devendra Dham, Bhuwana.  The celebration to continue its streak in cities namely Varanasi, Madurai, Thiruvanantapuram and Mysuru from September 09 to October 16, 2022.
People of Udaipur and state of Rajasthan will get a glimpse of Goa’s authentic cuisine, music, dance, culture and traditions through various live events.Main attractions of this event would be performances from Goa’s indigenous bands The Klixs, Steelas well as dance performances from GoanDance Troupe. It will also feature the famous and cheerful parade of The King Momo –face of Goa Carnival.
Commenting on the celebration, Hon’ble Chief Minister of Goa Dr.Pramod Sawant states, “We are delighted to showcase the multifaceted achievements of Goa Government since Liberation of State. It has persevered and witnessed tremendous growth in various spheres ranging fromgood governance to sports, art and culture, tourism, education, healthcare and many more. Goa@60 is an initiative to attract more tourists and investors alike that will give further impetus to infrastructure, agriculture, tourism, transport, IT, safety & security among others which in turn will improvequality of life in Goa. With this, we aim to put Goa on the global map.”
In other states, the celebration will take place at below dates:
In Varanasi (Uttar Pradesh) - September 23 to 29
In Madurai (Tamil Nadu) – September 30 to October 02
In Thiruvananthapuram (Kerala) – October 07 to 09
In Mysuru (Karnataka) – October 14 to 16
Top officials from the Government of Goa will be a part of this celebrationinteract with key officials from these six states. They will talk about the 360° progress of Goa through good governance, digitalization of services, enhancement of standard of education and a boost in industrial development and employment opportunities, efforts to protect and preserve the green cover, restore and conserve Goa’s heritage that have attracted more and more tourists from India and abroad.
The Government of Goa also intends to highlight its roadmap and vision for taking Goa to greater heights in the coming years by adding infrastructure like the new international airport at Mopa, developments in Information Technology, new services for tourism, better transport facilities and measures taken to enhance safety and security for local population and visitors to the State as well.
This event will also pay tribute and honour all those who fought for the liberation of Goa from Portuguese and also,those who worked to enable Goa attain Statehood, which holds in high admiration of the people of Goa.