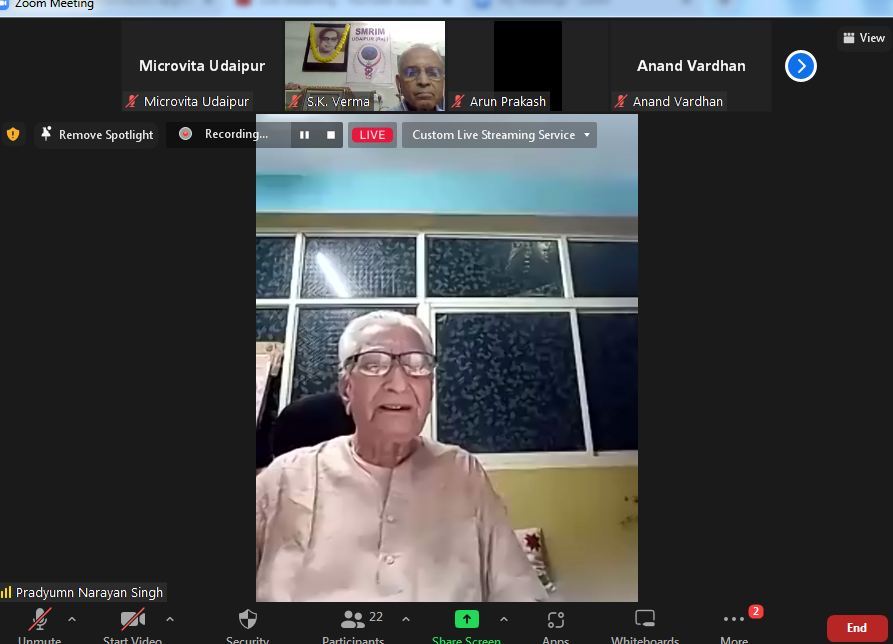 Udaipur: The third virtual talk of the Prabha`t Samgiita Week which is being celebrated from 11th to 18th September by Society for Microvita Research and Integrated Medicine (SMRIM) and Renaissance Universal (RU), Udaipur was held on Friday, 16th September, 2022. The program started with playing of Prabhat Samgiita no. 4505 'E Gan Amar Jeevaner Ananda Dhara'. Then President SMRIM & RU, Dr S K Verma introduced the Keynote speaker, Shrii Pradyumn Narayan Singh from Purnea, Bihar who served Ranchi University as a lecturer of Anthropology for many years.
Shrii Pradyumn Narayan Singh shared  his life's experiences with Prabhat Samgiita. He said that Prabhat Samgiita (PS) takes one from the physical world to the spiritual world. PS is a precious gift given by Shrii P. R. Sarkar whose background was prepared decades ago before 14 September 1982 when the first PS was given. He served as secretary of Aungika Society and sung a PS in Aungika 'Tora vaaste Hamra Prabhu' which was given in Raag Bageshri and explains the feelings of a spiritual aspirant when Supreme being arrives, then all the darkness of life has gone just as a full moon light. He said that if feelings of devotee are like 'Radha' then Lord is compelled to arrive and the relationship between a devotee and Lord is just like two sides of a paper. Further, he emphasized that PS is an eternal flow of love which will sustain for eras to come and depicts each and every emotion as a dialogue between a spiritual aspirant and his beloved Lord.
Moderator of the program, Dr. Vartika Jain, Secretary, SMRIM told that this series of virtual talks are being arranged on the occasion of 40th Anniversary of Prabha`t Samgiita (1982-2022) which was composed by Shrii Prabhat Ranjan Sarkar in a very short span of 8 years and 36 days. In the end, a question and answer session was held. After that, Dr Verma proposed a vote of thanks to the keynote speaker, all the participants, and the entire organizing team.The program was smoothly conducted on Zoom platform with live streaming on YouTube.