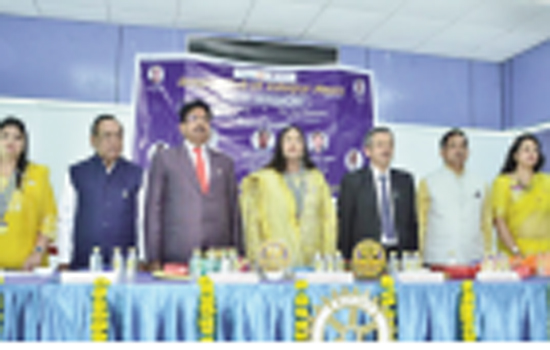 Udaipur: The posting ceremony of Rotary Club Meera for the year 2022-23 was organized at Rotary Bajaj Bhawan, Rani Road. The chief guest of the ceremony was Bharat Pandya, former Rotary International Director and Trustee of TRF 2022-26, Posting Officer, former Governor and Rotary International Coordinator RajeshAgrawal for the year 2023- 26,formerGovernorNirmalSinghvi,AssistantGovernorHarsha Kumawat. graced the ceremony On this occasion, Bharat Pandya said we talk about the girl child and women empowerment daily. Still, we are waiting for the day when no one will talk about women's empowermentbecausewomenwillautomaticallybecomesoempowered that for them to talk about empowerment. It would be pointless. He said that Rotaryhasearned $1 billion in polio e r a d i c a t i o n through its Rotary m e m b e r s a n d spent the same amount.Duringthe last six months, cases have been found in Pakistan and Afghanistan, and one patient was found in a child who went from Pakistan to Mozambique. . Rotary showed the world the dream that any disease could be eradicated. Globally, $ 325 million is being spent every yearbyRotaryon various service activities.Every year, $ 200-225 million is contributed by Rotary members to the Rotary Foundation. Sunset happens everywhere in the world, but there is no sun setting on the work of Rotary. Rotary is now working on the environment- Pandya informed that keeping in mind the increasing environmental problems in the world, Rotary has been working on the environment at the global level for the last year. Women's leadership participation in Rotary International will be increased from 24 percent to 30 percent in the next two years. Former Governor Rajesh Agarwal said that with the help of the Rotary Global Grant Project, a project would soon be completed in R.N.T. Medical College with the help of 40 thousand dollars. Rotary province in Rotary International is the largest province according to the number of 3054 members, which is formed by combining Rajasthan and Gujarat. Former Governor Nirmal Singhvi said that Rotary Club Meera had left an indelible mark in the service work by doing many milestone projects in the city. Newly elected club president Bhavya Bhoot Garg said that after joining Rotary, there is no need for any person to doaPersonalityDevelopment coursebecauseRotary teaches her a lot in Rotary life. This year Rotary Meera will set new dimensions in the service sector. In the ceremony, Rajesh Agarwal administered the oath to the newly formed board, including newly elected president Bhavya Bhoot Garg, secretary Jyoti Kumawat and wore pins. Outgoing President Sushma Kumawat presented the Presidential Collar to Bhavya Bhoot. In the ceremony, Nirmal Singhvi administered the oath to thenewly formedexecutivecommitteeofInteractClubMeera. Senior member Madhu Sareen introduced the chief guest Bharat Pandya to the function. Inauguration of Thela Project to provide employment- the guests inaugurated the Rotary Meera Thela Project for selfemployment for poor women. Rotary Meera will select the city's poor women and offer handbags to them so they can earn their livelihood through it. Kavita Srivastava andArchana Shaktawat conducted the program. In the beginning, Ratan Pamecha presented Ish Vandana, while Secretary Jyoti Kumawat expressed gratitude. Kavita Baldwa for Way Test was recited in the function.