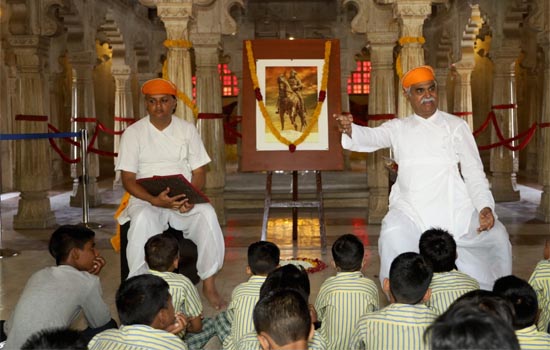 The Celebration of Maharana Pratap Jayanti made Mewar on top of the WorldWorld. Many organizations of not only Mewar but Rajasthan Celebrated this great event with enthusiasm. The  Maharana of Mewar Charitable Foundation, City Palace, Udaipur, celebrated the 482nd Birth Anniversary of Maharana Pratap exceptionally on 2nd and 3rd June 2022 at Badi Mahal, City Palace, Udaipur. Artistes of Martand Foundation, Udaipur, narrated the story of Legendary Maharana Pratap titled "KAHANI KEEKA KI ."Senior Theatre Director Vilas Janve and his associate Manish Sharma as storytellers, enacted significant parts of the story, which was focused on how Maharana Pratap regarded and loved the Bheel soldiers of Mewar.
Their binding, love, and sacrifice for the freedom of Motherland was illustrated very effectively by the artists. Sh. Bhupendra Singh Auwa, Administrator in Chief, Maharana of Mewar Charitable Foundation, welcomed the Children and caretakers. Children from special Schools. At the end of every session, all the listeners applied the sacred soil of Haldi Ghati on their foreheads to pay Tribute to Maharana Pratap.At City Palace Museum in the courtyard of Jyeshtha Shukla, on the third day of Jyeshtha Shukla, in front of the memorable Maharana Pratap, the pundits bowed down by garlanding and lighting the lamp.
Tourists who visited the museum bowed down to Maharana Pratap and cheered him. Lighting decoration has been done in City Palace on this occasion.The statue of Maharana Pratap at the Maharana Pratap International Airport, Dabok, was garlanded by the Foundation with chanting of Jalabhishek and Naivedya was distributed by lighting the lamp.