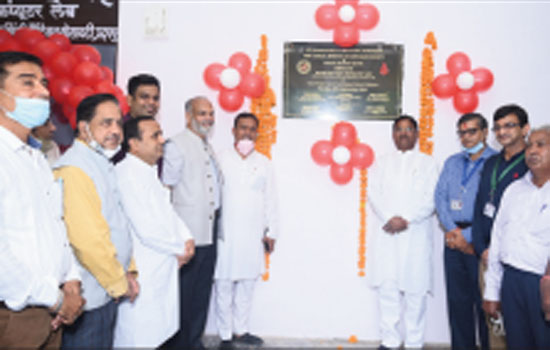 Udaipur : SaralEducationCare Computer Lab with 29 computers was inaugurated on Monday inFatahSchoolunder the joint aegis of Smt. Sarla SinghviCharitableSocietyand SaralBloodBank. It was inaug u r a te d b y M u n i c i pa l Corporation Deputy Mayor Pa r a s Si n g h v i , fo r m e r Congress MP Raghuveer Meena, former Up Zi lz Pramukh Laxminarayan Pandya, Principal Chetan Paneri, DEO MukeshPaliwal, Saral Blood Bank President Ganesh Lal, Founder Shyam S Singhvi, and Sanyam Singhvi. The lab is air-conditioned, with networking and WiFi facilities. Deputy Mayor Paras Singhvi said that Saral Blood Bank has done a virtuous task by setting up 29 computers in thegovernmentschooltomake thegovernment students computer proficient today. This work will bring a lot of change in the lives of urban and rural students.Thekeysofthecomputer lab were provided to the school management in the hands of the guests. On this occasion, former Congress MP Raghuveer Meena, while pointing to the pictures of great men in the auditorium, said that these pictures are not just hanging onthewallbutinspiresusevery moment every time. These great men worked hard at a timewhentheresourceswere only innameandthecomputer could not be thought of. If Bhamashahcontinuestocooperate in the temples of educationinthisway,thentheday is not far when every student can be able to do a lot in life by taking advantage of smart education. He appealed that th e r e i s n o d e a rth o f Bhamashahinthecity,justthe need is to reach them. He should make good use of his wealth by giving his contribution to the temples of education.DEOMukeshPaliwal said o n th i s o c c a s i o n th a t Bhamashah, who made such adonationinthetempleofeducation, deserves congratulations. He said that we are in the 21st century today and computer education is the need of the hour. On this occasion, Shyam S Singhvi said that it is the responsibility of every person thatwhatever youhave,whatever you have, some contribution should be made to the temple of education. The children studying in the temple of educationwillgetabettereducationfromthisandthemoney ofBhamashahwhogives itwill also be utilized properly. Explaining the importance of blooddonationindetail,hesaid thateventhesimplebloodbank had to face a lot of problems during the period of Corona. The availability of blood in the bank was also reduced but there are blood donors in his team who have to make only one call and immediately they appear with their colleagues for donating blood.Role models of voluntary blood donation honored - In the program, he also welcomed the guests b y g a rl a n d i n g U m e s h Manwani,GajendraBhandari, Raktadata Yuva Vahini Sansthan, and Satyendra Pal SinghKappubywearingagarland,turban,shawl,andupperna. . He said that after recovering from the Corona period, this simple blood bank, which was started again with the same energy, has engaged in public service. He appealed that wherever, wherever it is, just blood donation should be done. Onthisoccasion,thehardworkingemployeeoftheblood bank, Shri Vikrant Singh was honored. Along with this, kits of bottles and hygienic 3-3 masks were distributed to all thedignitariespresentforprecaution from corona and due tothepossibilityoftheupcoming corona, the distribution of kits to voluntary blood donors will be continued.Principal Chetan Paneri said that today is a historic day for Fatah Schoolas today'smodernand well-equippedcomputerlabis being dedicated to the students. With this, students will also become smart and they will benefit from smart educati o n . He s a i d th a t th e Go v e r n m e n t Hi g h e r SecondarySchoolwasestablished in 1922. Many students who have studied from here havedecoratedhighpositions, are doing it even today, and will continue to do so. Giving detailed informationaboutthesociety,Sanyam Singhvigaveinformationabout the work done from the early stages of the society till date. He said that the society was started at a time when there was no special awareness amongthepeopleaboutblood donationinUdaipur.Gradually, through society, we explained the importance of blood donation through various means, its results are in front of everyone today. He expressed his heartfelt gratitude to the blood donors who have been associated with the society since its inception.In the ceremony that started with Saraswati Vandana,theguestsandblood donors were greeted by garland, turban, and shawl. In the ceremony, the teacher Sudha wasgreetedonherretirement andshewasalsogivenafelicitation letter. Hundreds of dignitaries of the city were present at the function. The programwasconductedbyDr.OP Mahatma.