The graph of organic agriculture will increase with technical awareness among farmers and customers - Dr. Rathore. 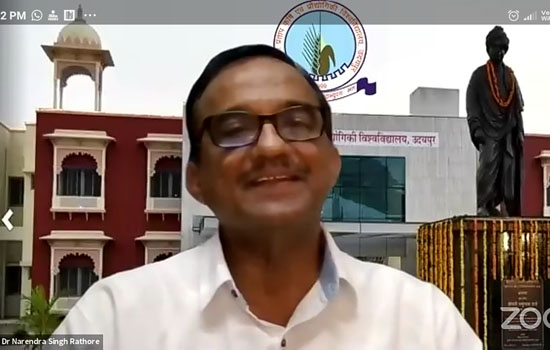 Dr. Ravi Shankar said that the event was organized as a commemoration to complete 75 years of India's independence, with the primary objective of bringing new technologies developed by research in organic farming to the farmers and producers. To carry out research and dissemination in the field of organic agriculture in the country, work is being done by 20 network projects in the country.

Chief Guest Dr. Narendra Singh Rathore, V.C. Maharana Pratap University of Agriculture and Technology, Udaipur, said that organic, natural, and cow-based agriculture is increasing in the country. But still, only 2 percent of the total net agricultural area of ​​the country is in certified organic agriculture, which shows that awareness of organic farming among farmers and the public is deficient. He informed that since the year 2005, organic agriculture is being promoted in the country through the National Organic Production Program. But the yield reduction, lack of complete knowledge of bio-inputs, lack of supporting resources, marketing, and high cost and certification of certified organic foods should be known to farmers, customers, and policymakers.

Dr. Rathore said a need to provide complete information about organic foods to farmers and customers through digital media. The dwindling number of micro-organisms and carbon in the soil is a matter of concern to farmers. He stresses the need for particular importance of the nitrogen economy in organic agriculture. He informed that certified organic agriculture would be done in a one-hectare area on the farm of each research and agricultural science center of the university. He said that organic agriculture could play an essential role in the conservation of biodiversity.

Along with food security, it is necessary for nutritional security and environmental protection. He called upon the Center's scientists to do intensive technical brainstorming on every component and component with organic growers beyond every element and dimension of organic agriculture so that the interested farmer can get a thorough knowledge of the pleasing and practical aspects of organic farming.

Dr. Suryanarayan Bhaskar, Deputy Director General (Natural Resource Management), Indian Council of Agricultural Research, New Delhi, said that Rajasthan has the lowest fertilizer and pasteurized use state. Therefore, in terms of export, organic farmers have a lot of opportunities in Rajasthan. Pesticide-free foods are increasing in the country. Thus, for group farming, organic farming should be adopted through group certification.

Dr. Piyush Poonia, Executive Director, Indian Institute of Agricultural Systems, Modipuram, stated that many technologies had been developed in the country since 2004 to promote organic agriculture as an alternative farming method at the national level. It is the priority of the Indian Council of Agricultural Research, New Delhi to extend all these technologies to villages.

Dr. SK Sharma, Director Research and Project In-charge, Organic Farming, informed about the university's ongoing organic farming research and dissemination techniques. Dr. Sharma said that the university has organic farming packages of 13 crops of the state, production methods of 20 organic inputs, indigenous practices of organic farming, use of organic poultry and silica of organic agriculture, organic agricultural research under the National Agricultural Development Scheme, and about 80,000 More than farmers, broadcasters, scientists and students informed about the technologies developed by the Center.