Four caravan chariots  kicked off to be aware for 'no mask-no movement.' 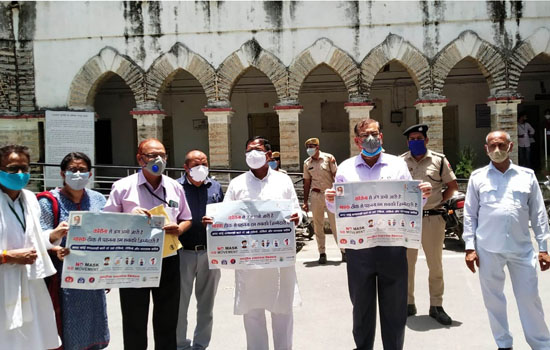 Udaipur / Four caravan chariots of No Mask-No Movement as Public Awareness Campaign to maintain the three-tier public discipline lockdown guidelines were flagged off by the District Collector and former MP Raghuveer Singh Meena on Monday. . Posters of the campaign were released during the awareness campaign being conducted under the joint aegis of National Health Mission Jaipur Unit, Police Department, UNICEF, and P.C.C.R.C.A.S.

Giving information about the three-tier public discipline lockdown, District Collector Deora appealed to the people to follow the guidelines and praised the campaign, saying that mask is the most effective way to be safe from diseases like covid-19. Former MP Meena, wishing the success of the effort being made by the campaign, taught the common people to avoid needlessly leaving the house. Gandhi Human Welfare Society Secretary Madan Nagda, social worker Mukesh Madhwani, UNICEF Child Protection Advisor Sindhu Binujit, and several representatives from the Police Department were present on occasion.

Convener of the campaign, Vipin Tiwari told that the four chariots of No Mask-No Movement Awareness Vehicle, in the markets, circles, wards, colonies of different areas of Udaipur city from May 24 to May 30 at 10 am to 6 pm.

Awareness chariot will be visited in these areas: