134 benefited in Corona vaccination camp set up by JAR's inspiration 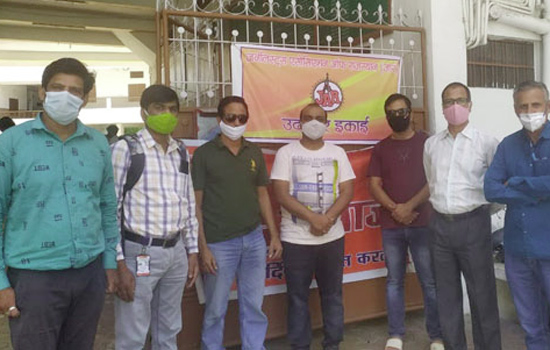 Udaipur: Inspired by the Udaipur unit of the Journalists' Association of Rajasthan (JAR), 134 civilians over 45 years of age were vaccinated at the Corona Rescue Vaccination Camp organized by the Hindu Empire Organization on Sunday.
Jitendra Mathur of the organization said that citizens started coming to the vaccination camp at 9 AM at Jyoti Public School in Fatehpura from early in the morning. Sanitizer was arranged at the entrance of the campsite and given the Corona Rescue Guidelines; shells were made at a sufficient distance so that distance could remain among the citizens. The imperative of the mask was also taken care of. Out of 134 citizens, 91 were vaccinated by the first and 43 by the second dose. These included senior journalists as well. All were registered online. There is the availability of covaxine and covishield in the camp so that the other dose does not cause any problem.
He informed that 134 citizens were vaccinated in this camp, which was conducted under the inspiration of the Journalists Association of Rajasthan (JAR) Udaipur till 4 PM. Earlier on the occasion of the morning camp, Jyoti Public School Director Manish Kumawat, Udaipur District President Nanalal Acharya, General Secretary Bharat Mishra, Women Secretary Priya Dubey, Treasurer Gopal Lohar, Media Incharge Harish Navlakha, Member Dinesh Hada, Harish Lohar, Activists of the organizing organization including Bharat Bhushan were present. The citizens of the area also assisted in this camp. On this occasion, Senior Photo Journalist Rakesh Sharma 'Rajdeep', JAR State Secretary Kaushal Mundra, JAR State Executive Member Rajesh Verma greeted the Corona Fighters personnel of the Department of Medicine and Health on their continued services.