Hotel food is pleasing to the bears. 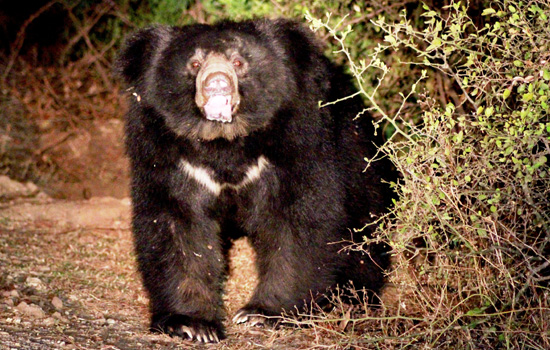 Udaipur. The bear is generally considered a very shy animal, but the bear's nature has changed over the years. The bears living in dense forests are now migrating to urban areas. In this struggle, a conflict between bears and humans is also increasing. What is the reason for bears to come to the populated areas, despite the availability of sufficient food in the forests? Researchers Utkarsh Prajapati of Mohanlal Sukhadia University, Udaipur, Assistant Professor Vijay Kumar Koli, and Scientist from the Nature Conservation Foundation. K.S. Gopi Sundar tried to find the answer to this question; many shocking aspects came out. It took these scientists five months to do this research, which began in December 2018; the research paper was sent to Cambridge University Press for publication. This review has recently been published in Cambridge University Press's journalORYX, after reviewing by experts.

Bears are coming to the cities from the forests.

Researcher Utkarsh Prajapati said that for the first time in the world in research, it was seen that the bear was seen coming from the forest into the city. Mount Abu is the only city where bears come inside the city to search in the trash and eat and are getting accustomed to eating this type of food. Researcher Utkarsh Prajapati said that Mount Abu is a tourist spot, and the remaining food is put in Dustbin by roadside and hotels outside the roadside and hotels here. In search of this food, bears come to the city. If there is proper management of waste disposal, then the growing conflict between bears and humans can be curbed to a great extent.

Attackers are happening due to a lack of food.

Balaji Curry, Deputy Conservator of Forests of the Forest Department, said that the incidence of bears appearing in cities has increased in the last five years, while the incidence of attacks on humans has increased in the previous two years. During the research, rural residents of Mount Abu and surrounding areas were also interacted with. Peoples. They told that bears come to the trash to eat the leftover food, mostly of leftovers, sweet foods from the hotel.

Research has revealed that a bear also attacks when suddenly encountered, but the interesting fact is that the highest number of women who have been exposed to bear attacks came from women. In these also, if a woman has come in front of a bear with children, the bear has become more attacked.

According to Environmental scientist K.S. Gopi Sundar, the bear, is a threatened creature. The natural habitat of this species is threatened. This is the reason that bears are coming from the forests towards the cities. The growing aggression trend in bears is also due to dumping and other food items thrown in the Dustbin. In search of it, bears are getting attracted towards the cities and when they do not get this food, they become violent and attack the humans on the way.