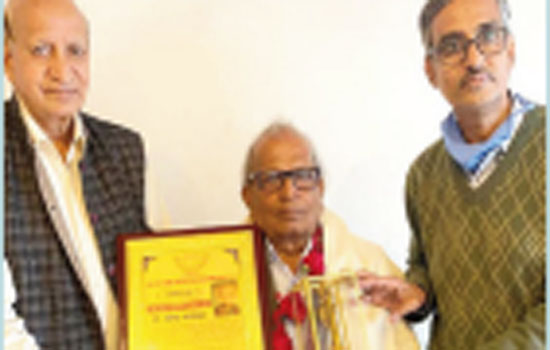 Udaipur: Dr. Mahendra Bhanawat,acultureadmirerfor multidisciplinary conservation work of folk culture and arts, was awarded the Kala Samay Lokshakha Samman. The award was conferred by the local time representative historian Dr. Dev Kothari and Dr. Sri Krishna ‘Jugnu’ in Udaipur by theKala Samaya SanskritiShiksha&SamajSewaSansthan of Bhopal. Dr. Bhanawat is the first scholar to receive this special honor in Rajasthan from the said institution. The founder secretary of the institution and Bhanwarlal Shriwas, the editor of Kala Samaya , and the Chairman, Pt. Sajjan Lal Brahmabhatta, said they could not reach themselves due to Corona. Dr. Kothari presented a memento to Dr. Bhanawat by wearing a shawl while Dr. Jugnu provided a quintessence and recited the Commendation. Talking about Dr. Bhanawat's contribution in folk culture, Dr. Kothari said that as a result of being active in this field for the last six decades, research is being done in every University of the country at present. Dr. Jugnu said that Dr. Bhanawat had brought Indian folk culture and folk arts to the world. Several research theses have been implemented and are being done all over the country. His first research study on Rajasthan folk was to establish the art of Rajasthan in the world. Rajendra Paliwal extended thanks.