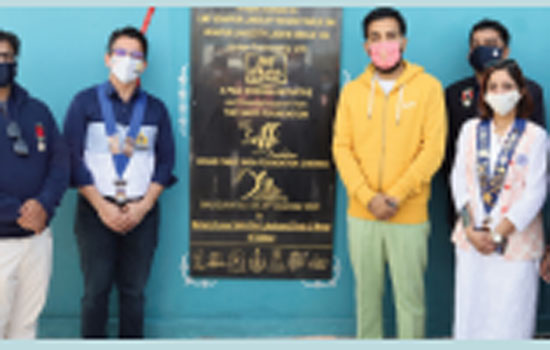 Udaipur: Under the aegis of Round Table India and Ladies Circle India, the 2 classrooms andtoiletblocksbuilt in the Govt. school of Dhani Iswal in the nearby village of Rebariyan is dedicated and handed over to the school management. Onthisoccasion,LakshyarajSinghMewaremphasizedthat the 21st century is for India, and building schools and facilitating infrastructure nourishes India's future. He congratulated and appreciated the construction of the structure within a short period during the epidemic. This roundtablewas the12thprojectinIndia206andLakecty Ladies Circle 125 and around Udaipur, in which 29 classrooms and six toilet blocks have been constructed. In the absence of this, along with various schools' renovations, the lives of more than30000underprivilegedchildrenaroundUdaipurwerebeing affected. As an organization, Round Table India has built more than 7200 classrooms in 3050 schools across the country, with over 300 million spendings on the lives of more than 8 million malnourished children in the last 20 years. It is being awarded the prestigious Bhamashah Award every year for its exceptional contribution in education. The project was executed by project coordinators Utkarsh Bakshi and Kapil Karnapuria, headed by Deepesh Kothari.