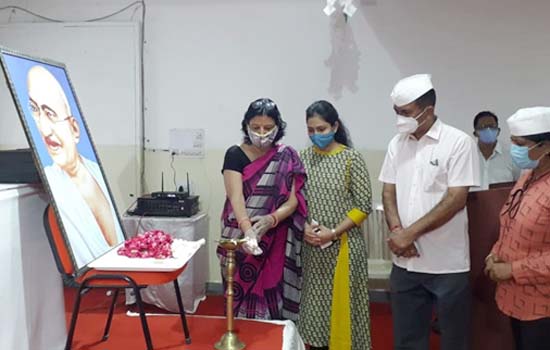 Udaipur: The best creation of God is Manav. Who can express thoughts and feelings accurately? God created man and woman. Women and men have always been complementary to each other. Neither is less than each other nor more. If there is a feeling of harmony in both, they both become Shaktipunj, and if there is a lack of harmony, they become the cause of destruction. Women have an essential role in building a better society because it is the woman who grows up by raising children. Instead of working together with women, women divide their work by saying that such work belongs to man and something like a woman. From here, children create a sense of separation from each other, for which they themselves have to pay. The society in which men and women are educated, healthy, and respect each other's thoughts and feelings, the same company will be called a better society. Alka Sharma, Director of the Central Public Senior Secondary School, honored with the President's Award on Saturday in the seminar hall of Central Public School, New Bhupalpura, to spread the thoughts of the Father of the Nation, Mahatma Gandhi, to the 'Equality-oriented Society for Women Empowerment Expressed in the seminar on 'Construction.'
Sharma said that intending to establish peace worldwide, Gandhiji is looking at the ideas with a hopeful eye. Who made a significant contribution to the freedom of the country walking on the path of truth and non-violence. It is because of Gandhiji's great ideas that the whole world sees him as a beacon. All of us should also imbibe the concepts of Gandhiji and set a model in front of society.
Addressing the seminar, district convenor of Mahatma Gandhi Jeevan Darshan Samiti, Pankaj Kumar Sharma, thanking Chief Minister Ashok Gehlot, said that Gandhiji's thoughts had been the task of guiding the whole world. To reach Gandhiji's ideas, village to village, Dhani-Dhani, Chief Minister Gehlot had decided to organize various programs throughout the year on the 150th birth anniversary of Gandhiji, which was extended to two years. In this series, various programs are being organized in the entire state from October 2 to October 6.
Kailash Tamboli, Nirmala Meghwal, Poonam Panwar, Kamla Bai Mali, Pinky Meghwal, Feroz Ahmed Sheikh, Sudhir Joshi, Ashok Tamboli, Naresh Chittora, Bhagwan Soni, Sandeep Garg were present in the program.
Ankita Surana and thanksgiving letter Meenakshi Joshi conducted the seminar.