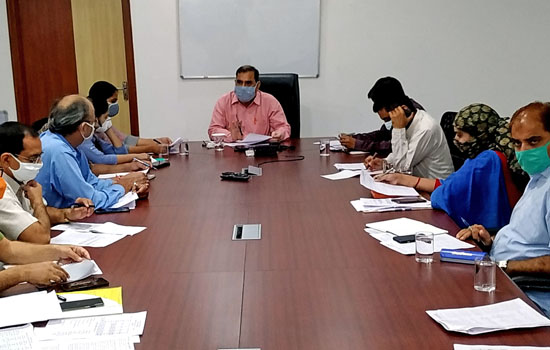 Udaipur: Preparations have started for Panchayat general elections in Udaipur District. On Wednesday, District Election Officer (Collector) Chetan Deora held an important meeting of the in-charge and assistant in-charge officers of the cells appointed in various arrangements to conduct the Panchayati Raj general election in an independent, fair and transparent manner and reviewed the preparations made. Instructions for arrangements.In the meeting held in the Collectorate Auditorium, the Collector inquired about the preparations made in the cell and asked to make appropriate arrangements as per the Election Commission's provisions. He took information about the randomization of the polling parties and preparation of the route chart, as well as training is given to the polling parties, printing and proofreading of ballot papers, distribution of material to the polling parties, preparation of EVMs and ballot papers, post-election EVM collection, Took information from the respective cell in-charge about the arrangements made for the control room for quick exchange of information and gave instructions for the smooth editing of them.
During this time, he reviewed the law and order situation in the past panchayat elections and asked to install enough police for peaceful elections.
To comply with the provisions of COVID, the Collector told RTO Prakash Singh Rathore that while directing the polling parties not to allow large vehicles, a small vehicle should be allotted to the polling party at each gram panchayat so that the vehicle gets more crowded -Pave not to be broken.
The Collector asked about the preparations made for the redressal of the complaints received from the cell in-charge set up for compliance with the Model Code of Conduct during the elections and directed that along with taking a report from the Sub-Divisional Officer on the complaint received, Get information about and get the complaint resolved at an accelerated pace.
Zilla Parishad CEO Dr. Manju, Deputy District Election Officer (ADM) OP Bunkar, ADM City Sanjay Kumar, UIT Secretary Arun Kumar Hasija, Training In-Charge, and TRI Director Govind Singh Ranawat, SDO Girwa Soumya Jha, District Logistics Officer Jyoti Kakwani, Code of Ethics In-charge Vinay Pathak, DTO Dr. Kalpana Sharma, Treasury officed Sandeep Charan, Mohanlal Soni of Election Cell, Mahamayaprasad Chaubisa and all concerned cell in-charge were informed about the preparations made by the cell.