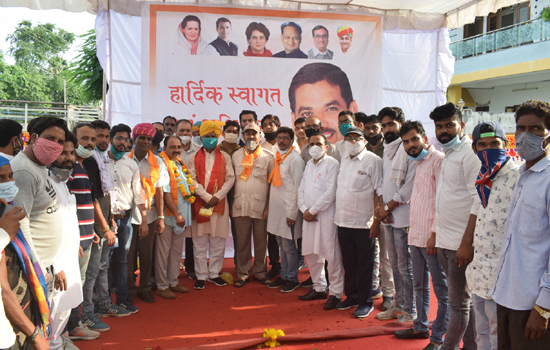 Udaipur: Former Union Minister Jitendra Singh and Ex. MP Raghuveer Singh Meena from Rajasthan have farm palace in CWC that was rejigged by party president Sonia Gandhi late on Friday. Meena was a member of the previous CWC, too. Talking to RH, Meena thanks Sonia, Rahul & Ashok Gahlot for renominating him in CWC. He said that his priority & devotion would be for strength in Congress in Mewar. He will try to Copup with differences among congress leaders & workers of the Mewar-waged division.
On his renominating, jubilation in Mewar is in full swing  100s of workers, including senior leaders, visited his residence uparna turban. As a reshuffle of state Govt. is due, Meena visited Kherwada & Shown interest in Veteran Congress leaders Daya Ram Parmar. Political observers are of the view that Daya Ram Parmar may get birth in Cabinet.