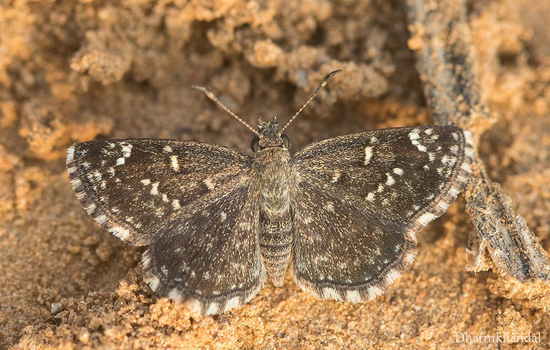 Udaipur: These days, while the butterfly month i.e. "Big Butterfly Month" is going on to take the campaign of counting, understanding, and conservation of butterflies across the country, two environmental scientists working for the conservation of environment and biodiversity Has succeeded in finding two new species of butterflies in Rajasthan.
Dr. Dharmendra Khandal, renowned environmental scientist and field biologist of Tiger Watch, Rajasthan, and environmental scientist Dr. Satish Sharma working for biodiversity conservation in South Rajasthan planted these two butterflies in the outer part of the Ranthambore tiger project area of Sawai Madhopur in the state Have discovered the species.Dr. Satish Sharma said that in the outer part of the project area, two new butterflies named Deccan Tri-Color Pied Flat (Koladalia Indrani Indra) and Spotted they have discovered a small Flat (Sarangesa Purendra Sati) in the beautiful butterflies of Rajasthan. Both these butterflies are members of the Hesperidin family.
Dr. Sharma pointed out that the upper surface of the coladenia Indrani Indra butterfly's wings is golden yellow on which there are four-four semi-transparent white spots with a black border on the outer core of the first pair of wings. The other two or two small areas remain. The back couple has dark spots on the wings. The torso, belly, and legs of this butterfly are yellow, and the eyes are black. The wing cores are black with white spots at minute intervals. There are more white spots on the hind wings. This butterfly is known in Bengal, Kerala, Himachal Pradesh, North-Eastern India, Chhattisgarh, Jammu and Kashmir, Karnataka, Madhya Pradesh, Maharashtra, Tamil Nadu, and Uttarakhand. After this discovery, Rajasthan has also joined its distribution area.The butterfly named Dr. Sharma Sarangesa Purendra Sati looks very attractive with a scattered white spot pattern on brown-black color. Its rings are white but have a blackish top. This butterfly is found in Goa, Gujarat, Haryana, Himachal Pradesh, Karnataka, Kerala, Madhya Pradesh, Tamil Nadu, and Uttarakhand. Presently this butterfly is present in Sawai Madhopur, Karauli, Bundi, and Tonk districts.Dr. Khandal said that rainy time is suitable for watching the movements of both butterflies. There are plants like Tridex Procambans, Lepidagethis cristata, Lepidagethis hamiltonian, etc. where they are more likely to be found. He said that these new butterflies' research records had been published in issue 24 (2) of the Indian General of Environmental Science.