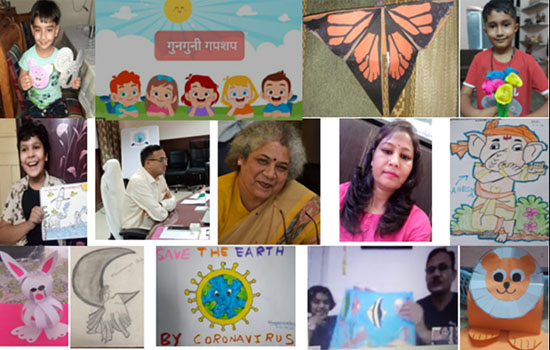 Mother's best and closest friend Vice-Chancellor said it of Maharana Pratap University of Agriculture and Technology, Udaipur, Dr. Narendra Singh Rathore, in the 14-day e-summer camp for 6 -12-year-old boys of university personnel by the Human Development and Family Department of the Community and Practical Sciences College. While addressing the participants, you said that you have a sweet taste from your childhood to growing up.

Sharing experiences, in a very easy and simple way, the children were told the tricks of life, they said happiness within themselves and told them not to run after worldly pleasures. You said that at this age you all have a lot of power and time to put it in a positive direction and achieve life goals. After your parents and teachers, you told the place of friends and told the mother the best and closest friend, guide. With the help of education from successful people, he called for inspiring his own life.

Appreciating the organizer's innovation and initiative, Dr. Gayatri Tiwari, the organizing secretary, and the coordinator, Dr. Sumitra Meena, told the great need to do such programs even further than the scientist of Food Science and Nutrition Department.

The 14-day e-summer camp for 6 -12-year-old boys of university personnel was started by the Human Development and Family Department of the Community and behavioral Science College, Maharana Pratap University of Agriculture and Technology University, Udaipur

Dr. Gayatri Tiwari said this was organized for the first time, due to which the needs and capacities of the children of this age group are given. Children of all age groups grew up and grew in it. Due to the internet connectivity work, sometimes faced difficulties, but the special thing was that no child was frustrated or stressed. Everyone was waiting for each other's turn and also encouraged with warmth. Every evening Children were told to have an activity related to the topic of the second day, on which they had to prepare. Some examples of the given activity - Why do you get angry? What habits do you feel are good/bad? Your interest What is it? In which genre do you consider yourself talented? Why does Papa scold and Mummy scold? What is the function of the watch? While telling the children the importance of body parts through the story, all the members of the family also explained with the example of the organs how important each relationship is. The negative effects of anger were also told through the story.

Dr. Sumita Meena, Dietary and Nutritionist, and Convener of the program gave a detailed discussion on Dietary Vihar through PPT. Dr. Jyoti Meena of Rajasthan University told the need and importance of positive thinking to children. It may not have been as effective by the screen, yet it was well-liked by the kids. The camp was named Lunar Gossip as it has 14 letters, and 40-minute sessions were held on a single character basis every day. Finally, a competition was organized for the participants according to age. In the concluding session, all the parents were invited and they were asked to give a message to the most participants, which was appreciated. Parents told that by doing online, children have developed skills for activities other than education, the boredom and irritability that was seen in the children due to folk down have come to an end, and the children are premature for this. He used to sit ready. He described this program as a cold shade in the hot desert. He said never to use negative knowledge and skills, develop your talent, be the right person, etc. A total of 46 participants attended the camp.