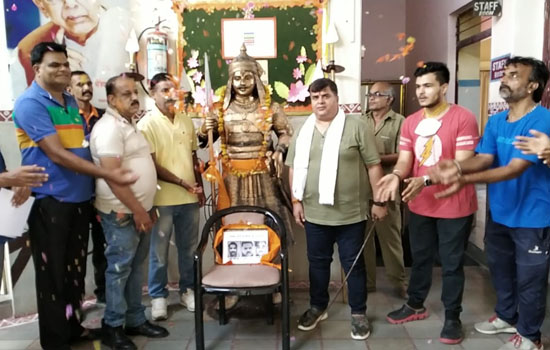 Udaipur: On the Haldighati War Day, through the webinar at Alok Sansthan, on Facebook and Instagram Live, Dr. Pradeep Kumawat, Director of Alok Sansthan and Chairman of Rotary Club Udaipur, said based on his research, it is said that Maharana Pratap's war of Haldighati, which was just three hours, which is known as the battle of Khamnor, was called by the historians in the period of war, the war of Haldighati, which was a three-hour war on 16th. It started in June and ended in September, i.e., after three months of the war, where the Mughal army was forced to leave Gogunda.
Dr. Kumawat said that the Mughal army escaped from the Haldighati war and feared to go to the areas around the palaces of Gogunda. They captured Gogunda for some time, but Pratap, by destroying all his logistics, logistics up to Gogunda Did not allow content to reach. Pratap urged everyone not to provide any kind of assistance to the Mughal army. In this way, Mansingh, after making a moat in Gogunda for three months, finding himself in a state of insecurity, he decided to send a list of soldiers to Akbar. On this, Badauni and some people said that there is no need to make a list right now, the Mughal army, which is craving for food, should first arrange their logistics water. After eating raw mango and horse meat, the Mughal army took out a few days. Still, when life became stressful, in September, the Mughal army left Gogunda and was again captured by Maharana Pratap.He said that this, the battle which started in Haldighati on June 14, Maharana Pratap won in September and ended the war. Let us all take inspiration from Maharana Pratap. If Pratap, a symbol of self-respect and courage, would have accepted Akbar's deprivation, he received wandering the wilderness for the sake of self-esteem.On this occasion, tributes were paid to the martyrs killed by China.