The elders took the responsibility the planted saplings 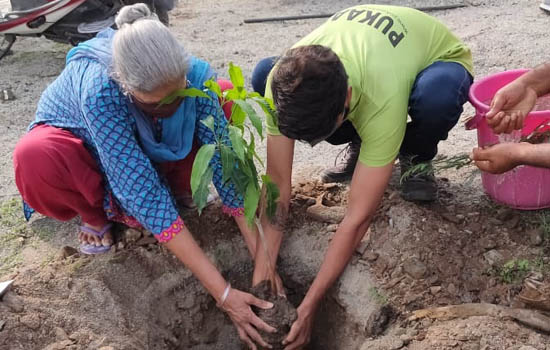 Udaipur:  On June 18, the Pukar Foundation members planted saplings at the Government Old Age Home Balicha (South Extension Scheme) under the joint aegis of Police Station, Govardhanvilas, and MMM Ayurveda College.
In this plantation program, the members of Pukar were supported by Mrs. Prem Dhanade, Deputy Superintendent of Police, Girwa, Udaipur Mr. Chenaram Pachar, and the police inspector, Govardhan Vilas, and elders of nursing homes.
During plantation was a lot of enthusiasm among the elderly, as if they wanted to make a new relationship with these plants.Under this relationship, everyone took responsibility to protect the plant they planted and to make it a tree.
After the plantation program, the officials of MMM Ayurveda College and Govardhan Vilas police station started a yoga camp and distributed the decoction.