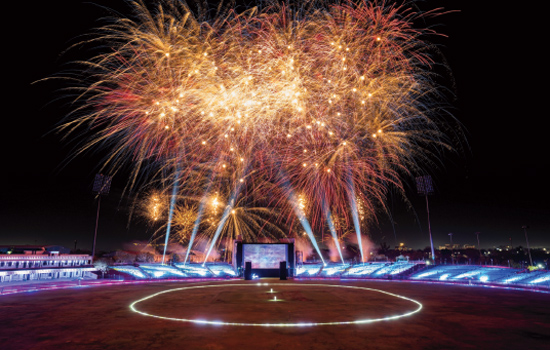 Udaipur: While the players of Rajasthan Royals will miss the joy of playing on a familiar pitch and the cheer and support of their fans at their home ground, they ensured that there was excitement in the Sawai Mansingh Stadium this season with a splendid show in partnership with Red Bull India to reveal their jersey for the 2021 season. The result was a spectacular 3D projection and light show that enveloped the Sawai Mansingh Stadium on the night of 3rd April 2021, as an audio-visual showcase was live broadcast from the stadium to fans around the world and players of the Rajasthan Royals team in their bio-bubble in Mumbai. The showcase was a celebrat ion of everything that the Royals fans hold dear to their heart – the stadium, the city of J a i p u r , th e Rajasthani culture and landscape – as well as a reflection of how the franchise’s association with Red Bull is helping them move forward at rapid pace, bringing out new ideas and helping the team grow. The show began with Sawai Mansingh Stadium being lit up, from the pitch to the stands. Following this, the limelight was thrown on a specially set up screen for the live show where a video montage of the stadium, city and Rajasthan landscape were interspersed with high-speed action shots of Red Bull vehicles and events. As part of the show, the Royals players themselves were 3D projected on the screen, wearing the jersey for the new season, giving fans a first-ever look at the pink and blue jersey they will wear in 2021. The show was a true tribute to Rajasthan and the Royals fans who might not be able to roar with support in the stadium while the team plays their matches this season, but is heard by each of the Rajasthan Royals players whenever there is a boundary or a wicket worthy of eliciting loud cheers. Sharing his experience on watching this unique Rajasthan Royals jersey reveal for IPL 2021 at Sawai Mansingh Stadium from the team hotel in Mumbai, Rajasthan Royals all-rounder and Red Bull athlete Riyan Parag said, “Last year, Rajasthan Royals team was wow'd witnessing the Red Bull athlete Dani Roman fly down to the beachside of our hotel in Dubai to reveal and handover amazing IPL 2020 team jerseys. This year, another epic jersey reveal, conceptualised by Red Bull and we look forward to making our fans proud this season.” Reacting to the new jersey reveal, South African all-rounder Chris Morris said, “Unbelievable reveal of the new jersey. From 2015 till now the jersey has changed a lot since the last time I played for Royals, and it is a beautiful jersey. I'm excited to be a part of this team again and proud that the foundation is the main driver behind the design.” “Creative Factory helped in the execution of this unique jersey reveal. Founder and creative director Vibhore Khandelwal commented, I would like to thank the entire team of Red Bull India for giving us the opportunity to design & execute the Projection Mapping content for the new Jersey Launch of Rajasthan Royals. This event is not just unique in its creative approach but also the time it took to execute. In just 10 days we put together this experience using the latest technology and creative minds of both teams Red Bull India & Creative Factory.”