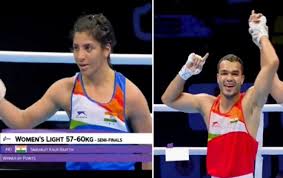 Indian boxers Vikas Krishan in 69 kilogram and Simranjit Kaur in 60 kilogram category have advanced to the final at the Asian Olympic Qualifiers at Amman, Jordan.  Krishan will face Eishaih Hussein of Jordan in the final today and Simranjit Kaur meet former two-time Asian champion Oh Yeon Ji of South Korea.

All the eight boxers have already secured their tickets to the Olympic Games by making to the semifinals but Krishan and Kaur will come back with at least silver medals after entering the finals.