The Confluence of Judiciary appeared in Chittorgarh 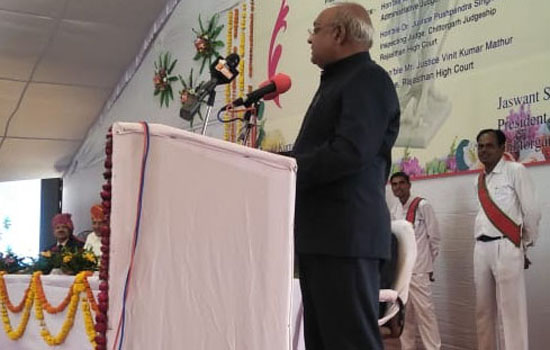 Chittorgarh: The Confluence o f J u d i c i a r y a p p e a r e d i n Chittorgarh on Sunday morning.Attendingtheinaugurationceremony of the court premises in Chittorgarh, all the judges insisted to work faster for the common man and the speedy disposal of pending cases. Supreme Court Judge Dinesh Maheshwari said that the beauty of the judiciary is that wherever the judges go in India they absorb the culture of that area very soon. The language and culture of the whole country is different in many places and there are many challenges in front of judicial system, but all Indians are one. He also referred to the characteristics and history of the fort visible from the court premises. He said that senior advocates should guide the young advocates in the court and the youth musttakeguidancefromtheexperiencesof senioradvocates.Inthis way, working together will developthejudiciaryandjusticewillalso be done faster. He said that in the field of law, youth are entering on their own free will, we must make them part of the judiciary which will give life to the judicial system. Supreme Court of India judge S. Ravindra Bhatt said that he got acquainted with the history of the fort through light and sound show. He also remembered Maharana Pratap, Maharana Sanga and Maharana Kumbha on this occasion. He said that under the leadershipofChiefJusticeofRajasthan High Court Inderjit Mohanty, the judiciaryofRajasthanwillprogress rapidly and the people here will get speedy justice. He said that special attention should be given to discipline, cleanliness and service in the courts. He said that it is thetaskofthecourts toseethem all in a uniform manner and serve the public.Chief Justice of RajasthanHighCourtInderjitSingh Mohanty said that this Court has been dedicated to public and the cleanliness and service of this Court will be presented as an example for the whole country. He also remembered the hard work of all the agencies and people who built this building. Judge Mohammed Rafiq of theRajasthanHighCourt saidthat the disposal of the pending cases is a big challenge and we should overcome this. He said that the old cases must be settled soon, which will increase public faith in justice. All measures will be taken to improve justice quality. Delay in justice is like denial of justice. On this occasion, he praised the culture and heroic land of Chittorgarh and also mentioned Mira Bai, Panna dhay and MaharanaPratap.RajasthanHigh Court Judge Pushpendra Singh Bhati said that by strengthening the infrastructure of the courts provethatthejurisdictionofIndia's democracy is equally strong. Big relief to the public The big personalities of the National level of the legal world have come here and opened all the doors of justice to the public. By the strong work of the legal world, people will have the same faith in democracy and justice. Chittorgarh court has largest campus, only Jaipur and Jodhpur courts have such big areas. Due tobasic facilities,people, specially senior citizens and disabled people will not have any difficulty here. It also has a separate facility of modern toilets for women which are very clean and tidy. Book Release SmitaChakraborty'sbook 'The ClosedPrisons of Rajasthan' was also released in the presence of all the judges on the occasion.