Grand launch of the first model court complex of the State 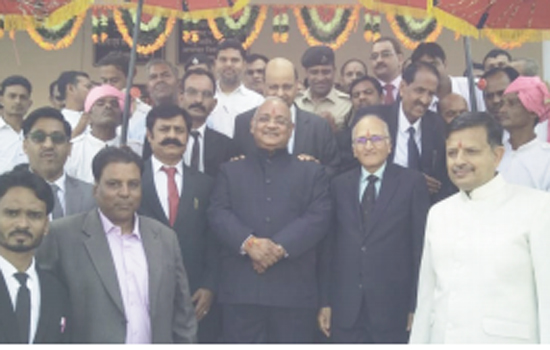 Chittorgarh: After the huge buildingoftheRajasthanHighCourt, Jodhpur in the judicial area, the new Court building has been ready in Chittorgarh,which was inaugurated on Sunday at 11 am in the presence of the judges of the country and the State. Inauguration with Vedic hymns The new court building was inaugurated with a chant by 21 students of Ved VidyalayarunbySriKallajiVedpeethand Research Institute. Visitor guests were also welcomed by Vamanas who were chanting Vedic mantras . By opening the Molly Bandhan, the chief guest inaugurated the court amid chanting. Aftertheinauguration,thejudges visited the new court complex and closely inspectedtheDJ1courtandsawthemodern toilets built in the premises. After inspection of the premises, the Advocate's Room was also inaugurated by opening the Molly by the Chief guest. IndianSupreme Court Judge Dinesh Maheshwari also planted saplings in the court premises. After this, the Chief Guest with Honorable Dinesh Maheshwari, Honorable Supreme Court Judge and HonorableS.RavindraBhatt,Honorable Supreme Court, lit the lamp with chanting before Mother Saraswati. Alltheguestswerewelcomedbyoffering safa, uparna as per Mewari tradition. Chief JusticeofRajasthanHighCourt Indrajit Mahanti, Administrative Judge Mohammad Rafiq of Rajasthan High Court,ChittorgarhJudgeshipInspecting Judge of Rajasthan High Court, Honorable Dr. Pushpendra Singh Bhati and Judge of Rajasthan High Court, Vineet Kumar Mathur were welcomed as per the Mewari tradition. District Collector Chetan Deora was also welcomed with the same affinity. Bouquets were also presented to all the guests. District and Sessions Judge Mr. Hemant Kumar Jain and Officer-inCharge Mr. Ajay Singh-Distinguished JudgeNDPSCaseinformedthatarrangements with adequate modern facilities for the officers and staff of the 13 Courts located at the district headquarters in the newly constructed court building at acostofabout24crores,hasbeenmade accessible. All facilities of parking, garage, garden, canteen, post office, dispensary, ATM etc. are available in this building simultaneously. There will be 9 courts on the ground floor and 4 courts on the first floor in the court building built in about 30 bighas area. In this complex,houses for11judicial officers have been constructed with all facilities. On the northern side of the building, 66 Advocate Chambers and AdvocateInstituteAuditoriumhavebeen prepared. Allotment of this auditorium has been done through lottery to 250 advocates for which an amount of Rs 11 crores was sanctioned by the Rajasthan High Court. These courts will be operated in the court premises. NodalOfficerChiefJudicialMagistrate Shri Kamal Lohia informed that out of the courts currently operating in Collectorate premises, District and Sessions Court, Additional District and SessionsCourtNo.1,2,3,Chief Judicial Magistrate,Ati. Chief JudicialMagistrate No. 1, 2, Judicial Magistrate and Additional. The Judicial Magistrate's Courtsarebeingtransferredtothis campus. At the same time, special courts NDPS 1, 2, special court Poxo Act and family court are already operating in the new premises. Office of District Legal Services Authority, operating since June 2013 District Legal Services Authority Secretary Sunil Kumar Ojha said that the office of the authority is being operatedinthenewcourtpremises fromJune 2013. District Legal Services Authority Secretary Sunil Kumar Ojha said that the legal service week was also inaugurated today by the guests who attendedtheinaugurationceremonyasperthe instructions of Ralsa. He informed that therewillbevariousawarenessprograms under the Legal Services Week to be held till 9 November. The Chief Guest of the inauguration ceremonyoftheCourtwas theSupreme Court Judge Mr. Dinesh Maheshwari. While the very special guest was the Supreme Court judgeS. RavindraBhatt . ThefunctionwaspresidedoverbyChief Justice of Rajasthan Court Indrajit Mahanti. District Collector Chetan Kumar Devda, ADM Mukesh Kumar Kalal and other important administrative officers were also present at the inauguration ceremony.