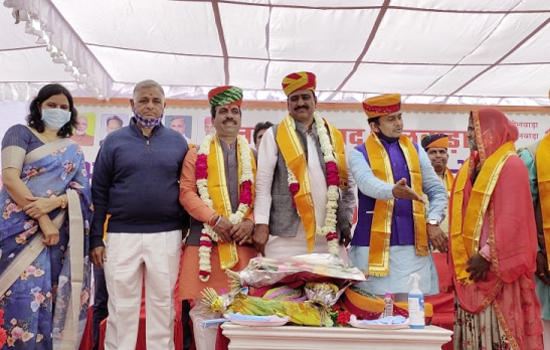 Bhilwara:  Municipal Council welcomes newly elected Chairman, Deputy Chairman - took over with appreciation.
The occasion was the inauguration and reception ceremony of the city council Bhilwara in which a new tradition was introduced this time, for the first time, the council commissioner Durga Kumari, along with the Chairman and deputy chairman, came down from the stage and garlanded all the elected councilors, wearing the saffron dupatta, turbanWill give good governance by taking all the society together. District in-charge and Municipal Elections District in-charge Dinesh Bhatt, Udaipur, said that all-round development would take place with all the society in Bhilwara, expressing heartfelt gratitude to the people of Bhilwara, where the Chairman and Deputy Chairman Gave us confidence that we will be able to give good governance in the city council.
Board will meet public expectations
On this occasion, BJP District President Ladu Lal Teli said that my fellow friends of 30 years had reached Chairman and Deputy Chairman's post while working in various positions of BJP. I want the team of all the councilors to stay together on a positive and co-ordinated public expectation Will try to live up to the integrity *Ram-Laxman pair will establish Ram Rajya * Former minister Kalulal Gurjar, while assuming the office of the newly elected Chairman, told the Chairman and Deputy Chairman to set Ram Rajya in Bhilwara, adding this to the district head, Barji Bai Bhil said that the pair of Pathak and Yogi Ram Laxman be immortal, all work will be good
The board will give new dimensions to the development of the city
Former District President and BJP State Representative Rajsamand District In-charge Damodar Agarwal said that the coming 5-year tenure should be memorable and a matter of inspiration for all of us. Besides, he hoped that the common people had supported the BJP with great hope. Live up to expectationsWill rectify the mistake made in the previous board Bhilwara MLA Vitthal Shankar Awasthi prayed with good luck and congratulations to God to give all of us so much strength that we can work with full expectation in public with the hope of the same. Despite the shortcomings, the people of Bhilwara won us this time with a pledge to fulfill those shortcomings. Office bearers of various societies, morchas, officers of the cell, city council officers, builders associations, district Saraswat Sabha, district Brahmin Mahasabha, Panchal Lohar Mahasabha, Koli Mahasabha, Muslim society officials welcomed Chairman and deputy chairman by offering garlands and Mewari turban. All the councilors of BJP, including Kodi Pradhan Karan Singh Belwa, Prashant Mewada Umaid Singh Rathore, Amit Saraswat, were present at the ceremony. Mukesh Sharma conducted the function on this occasion. Vice-Chairman, Pradhan, Deputy Pradhan, Chairman, Municipality of the district The head, sarpanch public representative, office bearers, senior workers were present.